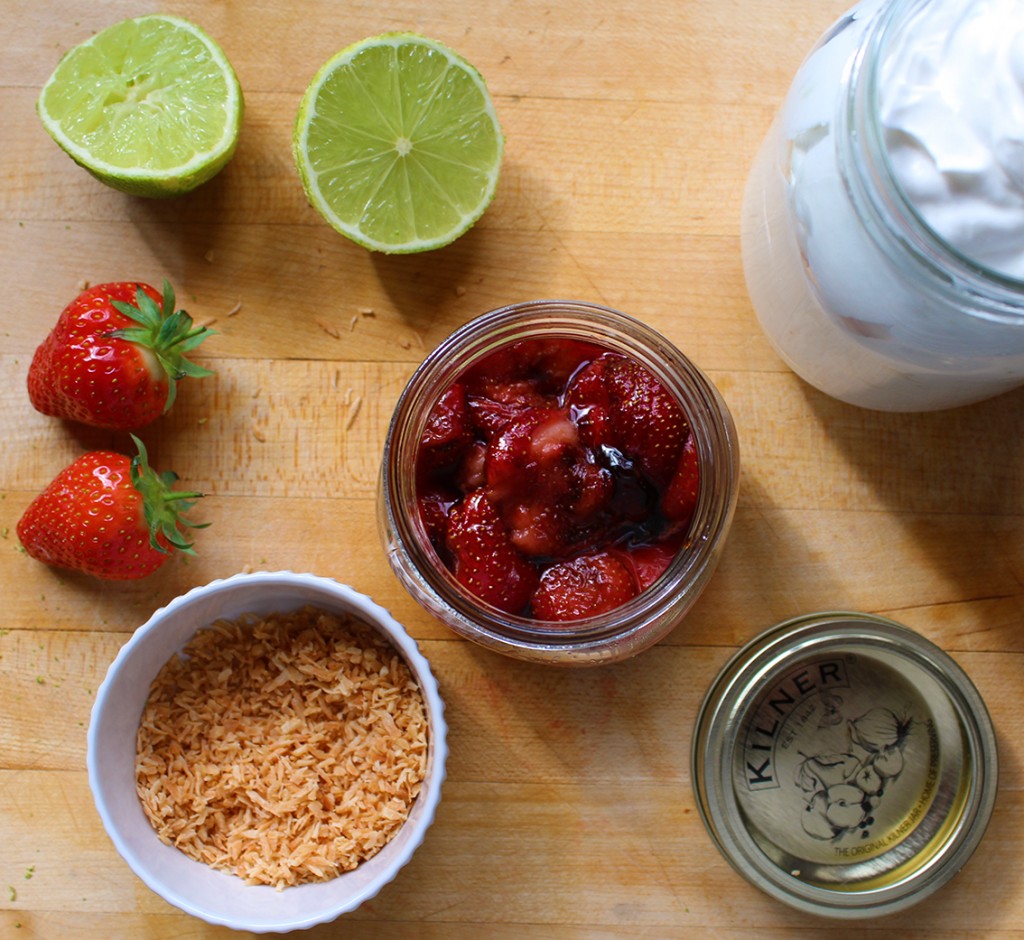 As May flies by we are inching ever closer to summer.  Strawberries, barbecues, Wimbledon!  It is all good and I can’t wait!  British strawberries are starting to make an appearance in the supermarkets, although the delicious local pick your own varieties won’t be ready for a couple of months, I couldn’t resist picking up a box recently.

They are not quite at their flavour peak yet so, to get the most out of your strawberry, I suggest you roast them.  Roasting strawberries concentrates the sweetness and depth of flavour.  When coated with a little honey and balsamic vinegar prior to hitting the oven , they become a taste sensation.  You can then store them in a jar in the fridge to use on your yogurt, in your porridge or simply with cream. 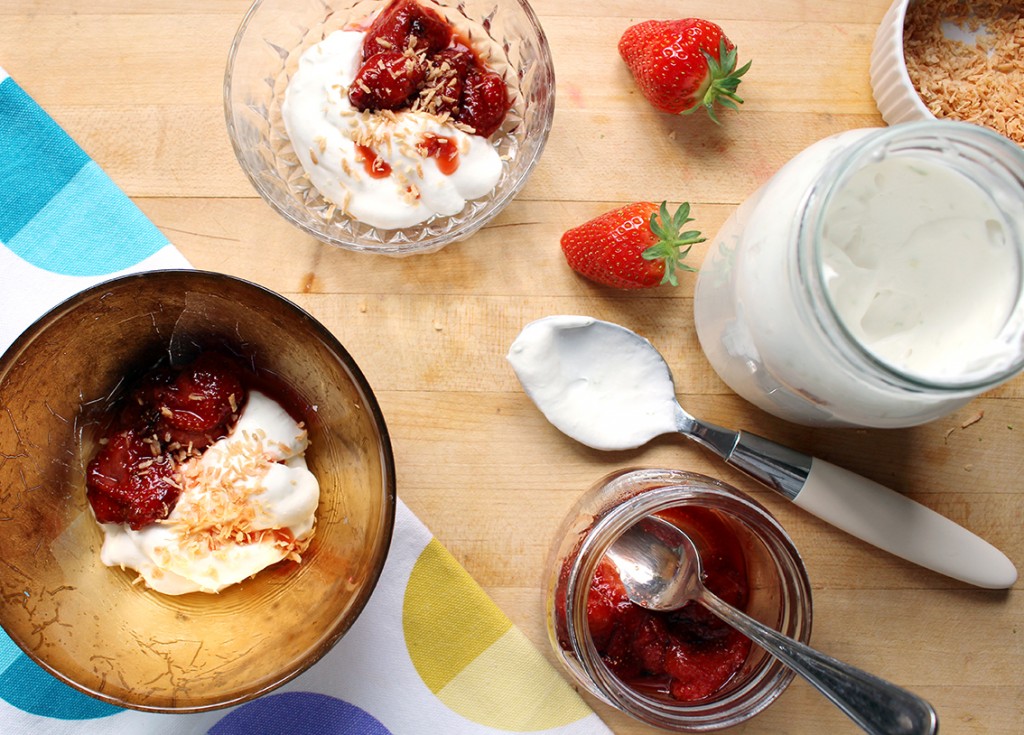 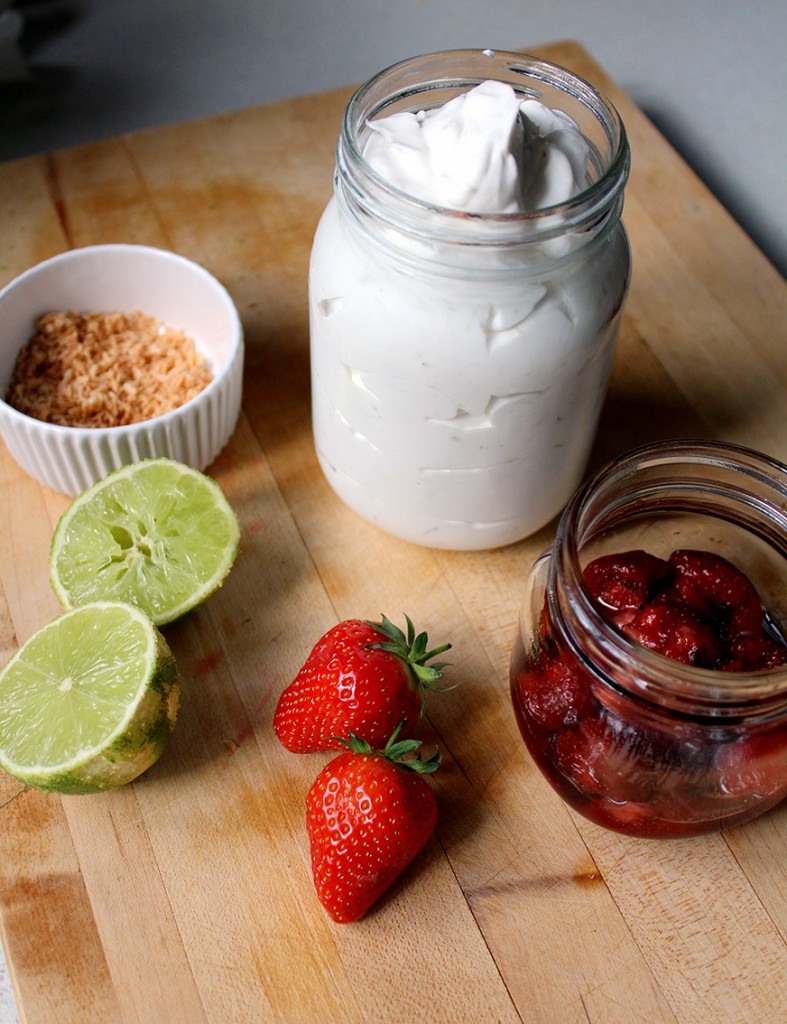 Talking of cream…I don’t like it.  I know that is really odd, because I like every other rich, typically calorific food on the go but I have just never been able to enjoy cream.  So the classic strawberries and cream is totally lost on me.  Strawberries and ice cream, now you’re talking!

Recently I have seen a lot of whipped coconut cream in the internet foodie world.  I was definitely intrigued to try it because I adore coconut flavoured things and it seems like a slightly healthier alternative to pair with desserts.  It’s so simple, you just chill a can of coconut milk to separate the water and solid, then whip the solid part until light.  Done and done.  A little sugar or zest can be added for additional flavour too.  Also, if you chill the coconut cream once it has been whipped it turns into a super light coconut mouse. I have discovered a whole new world of dessert opportunities. 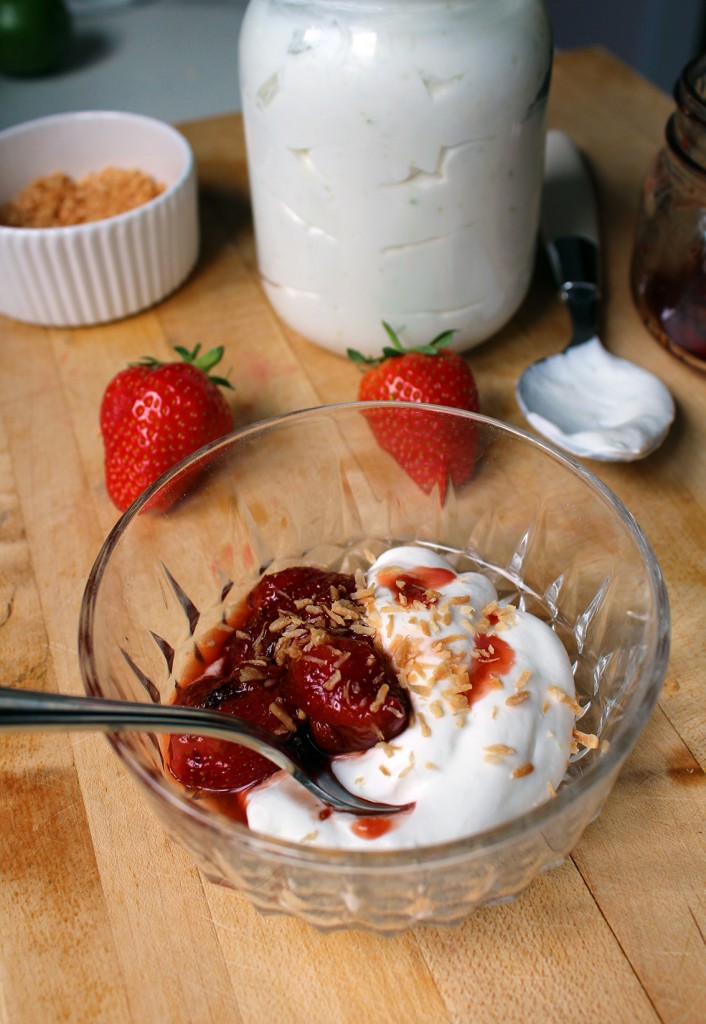 This is such a summery recipe.  Even getting the ingredients together will put a smile on your face with all the pretty colours. 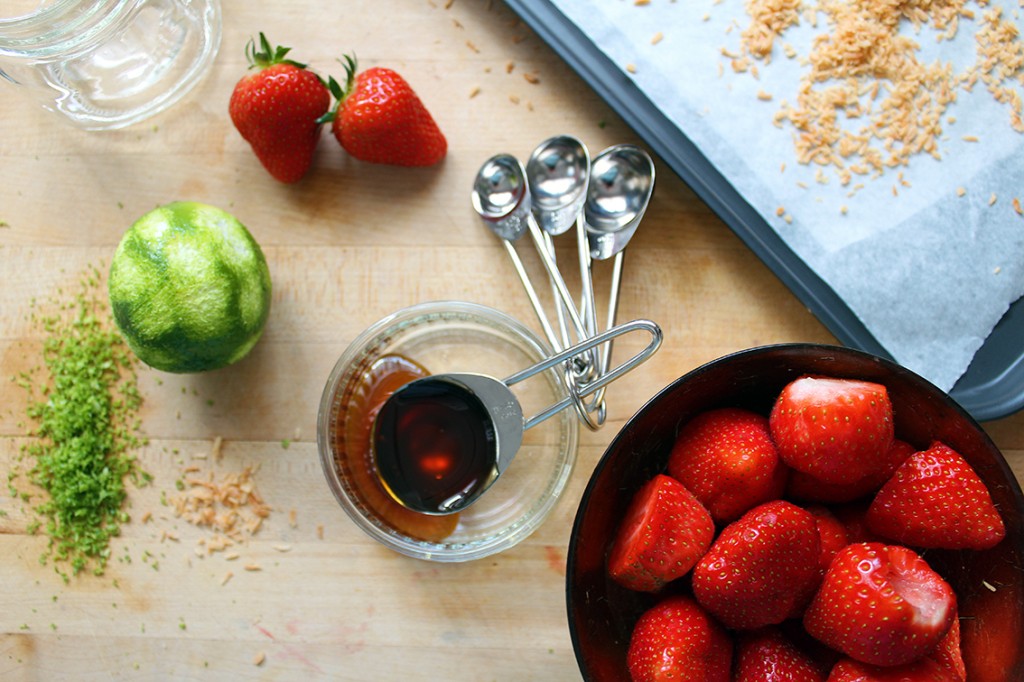 Whip the coconut for about five minutes until holding soft peaks.  Adding lime zest is perfection. 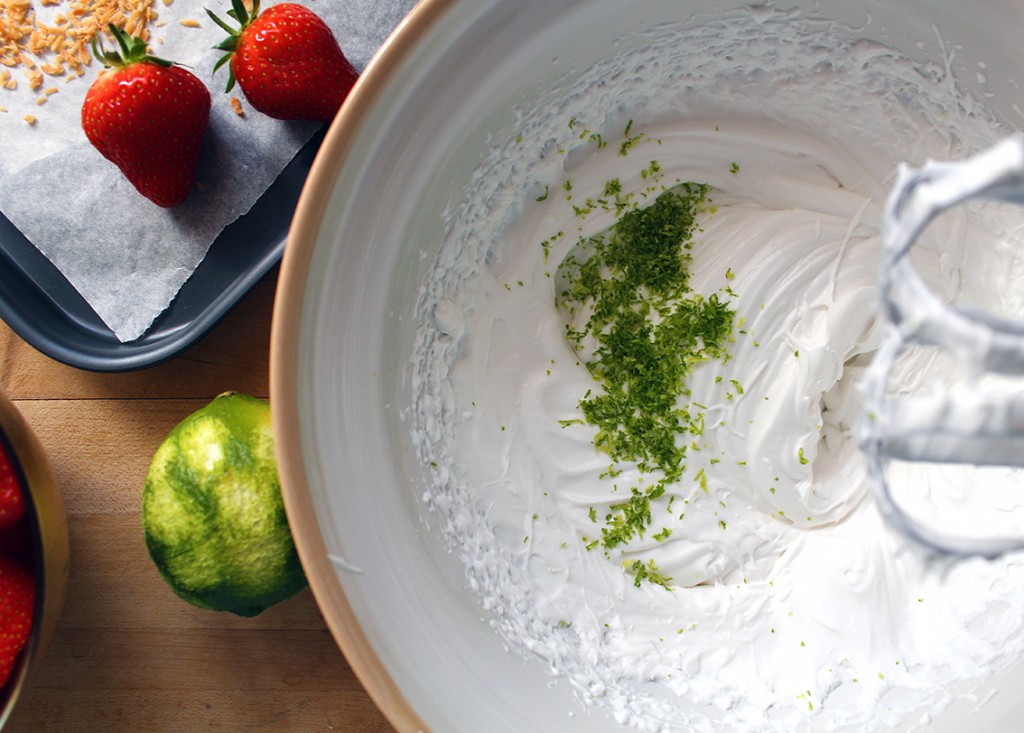 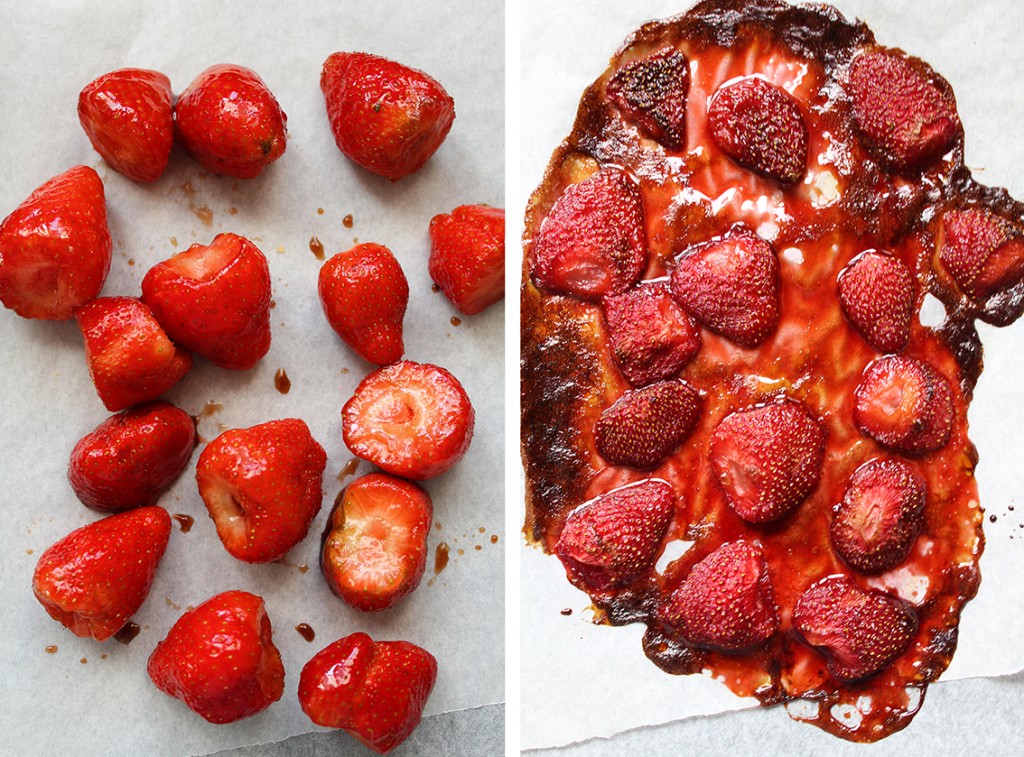 And you’re done!  Easy dessert that would be perfect for a summer barbecue party. 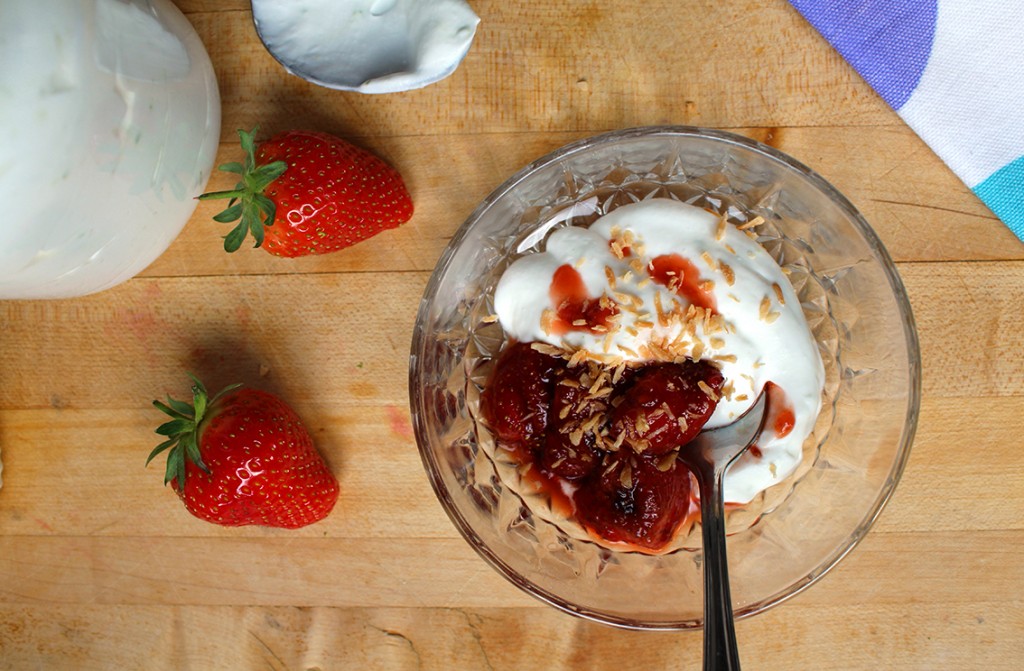 For the coconut cream:

The day before you plan to make the coconut whipped cream, please a can of coconut milk in the fridge to set.

The following day, open the can of coconut milk and scoop out the solid cream in the a large bowl.  Add the lime zest and beat in a mixer or with electric beaters for about 5 minutes, until it resembles softly whipped cream.

Use immediately or store in an air tight container in the fridge.

Preheat the oven to 180 degrees C.

Remove the green stalk from the strawberry and place in a bowl.  Generally the strawberries should be kept whole but if some are very big just chop them in half so they are all about the same size.  Toss the strawberries in the honey and balsamic vinegar.  Tip the whole lot on to a baking tray lined with greaseproof paper and bake for about 30 – 40 minutes.  The juices should have reduced but don’t let them burn.

Remove from the oven and allow to cool for 10 minutes.  Scoop the berries in to a jar, squeeze over the lime juice and stir.  Allow to cool completely then store in a sealed jar in the fridge.

Scoop some berries in to a small bowl and top with the coconut cream and toasted coconut.