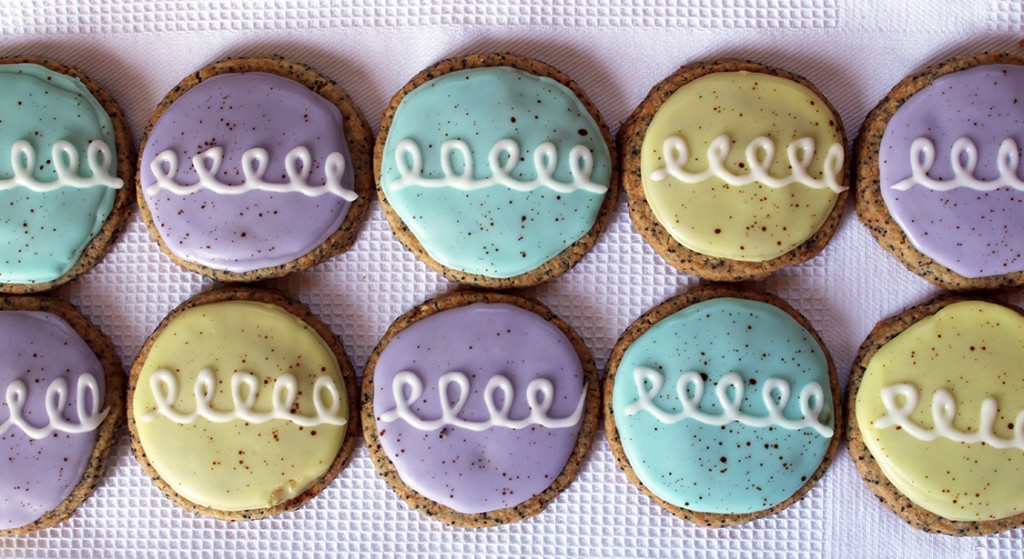 Happy Easter everyone!  I hope everyone enjoys their day and has an Easter weekend filled with loveliness.  As long as you have plenty of chocolate I would say you’re good to go for a fun time.

My weekend has been lots of fun so far, very much helped by the gorgeous weather we’ve been having.  I was down in my old ‘hood (Glasgow) to see McBusted at the Hydro.  Let me tell you, it was SO MUCH FUN!  McFly shows are always a good time and leave you grinning from ear to ear, the Busted factor just added to the craziness and increased the jumping factor.  On Saturday I had a barbeque with friends in a beautiful spot in Killin, the Falls of Dochart. I’m weirdly obsessed with any natural water feature, weirs and water falls in particular so these falls were like heaven for me.  That combined with a barbie..what more could you ask for!

As for Easter baking, after my speckled egg macarons I was desperate to speckle something else.  So, when I was invited a few weeks ago by Maison Blanc to enter their Easter ‘Blogger Biscuit Challenge, I thought speckled shortbread would be perfect.  The competition is to design an Easter themed biscuit to become part of their 2015 range.  The entrants will be whittled down to 3-5 designs which will then be voted by their customers, and the winner will have their biscuit sold, get a tour of the patisserie and meet their head Patissier Sebastian Boulanger.

The biscuit will be judged on its appearance and flavour profile, and although they didn’t ask for a recipe I’ve included one below as always, I hope you guys like the sound of them enough that you’ll want to try them!  I wanted to keep my design simple but striking.  I chose sweet spring pastels, speckled like eggs, with a white swirl along the centre to give them a lift and to ensure they were as eye-catching as possible. 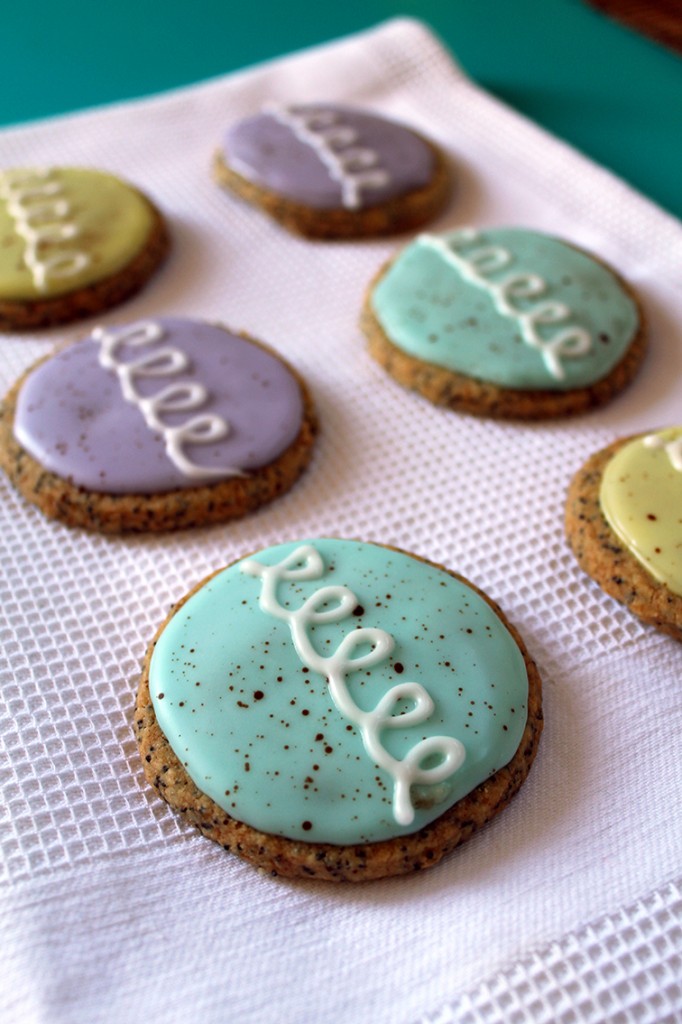 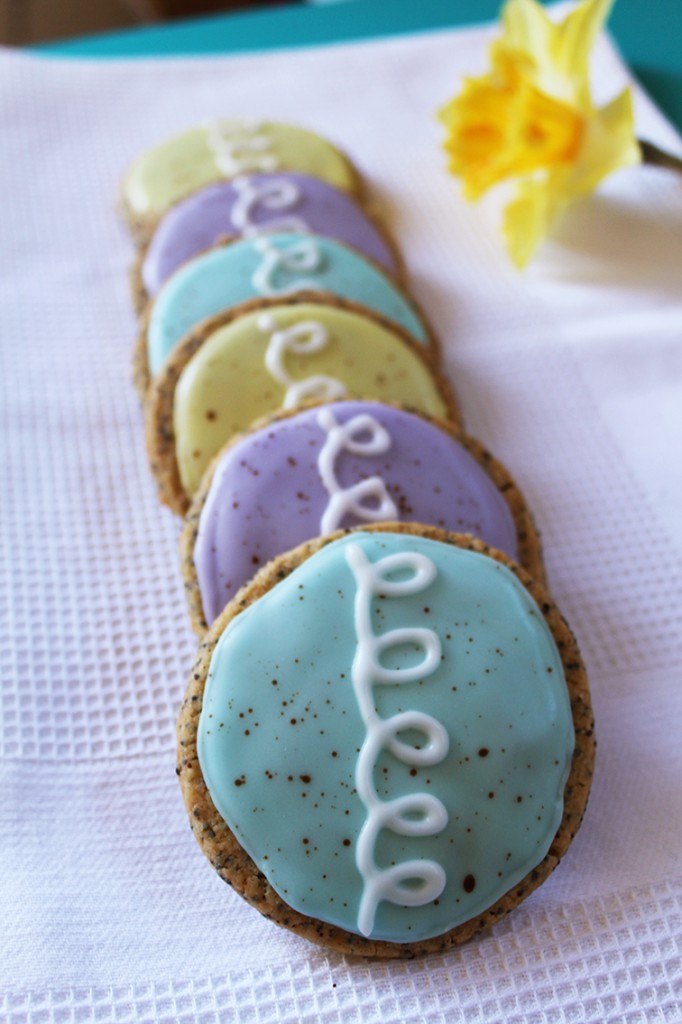 When I was trying to decide on a flavour my first though was a simple sugar cookie, but although this competition is appearance weighted I didn’t want to settle for a simple flavour.  The obvious choice for spring, in my mind, is lemon.  Then my mind automatically thinks about the addition of sugar and butter, which led me to shortbread – the biscuit celebration of butter and sugar.  Just to kick them up a notch with a little texture I added poppy seeds, a classic pairing with lemon, although more traditionally found in a cake.

I think they look totally cute and, more importantly, taste delish.  I hope you and the Maison Blanc customers agree!

For those of you that don’t know, Maison Blanc is a patisserie based in and around London.  A little far for me all the way up here in Inverness, but they do offer an online shop if you fancy some tasty treats in the mail.

In a bowl, or on a chopping board, rub together the sugar and lemon zest with the back of a metal spoon until they are completely combined. The sugar will turn a yellowy colour and will smell strongly of lemon as all of the oils in the zest are released.

In a large bowl, or in a stand mixer, beat together the butter and orange sugar until pale and fluffy. Sift the flour, cornflour, and salt into the bowl, add the poppy seeds and slowly mix together until combined. If required, use your hands to gently bring the dough together.

Tip the dough out onto a lightly floured work surface and knead lightly to bring it together to form a ball. Gently pat it down to form a flat disc.  Roll out the dough between two pieces of greaseproof paper, turning the dough by 90 degrees after each roll, until it is 1 cm thick.

Remove the top layer of greaseproof paper and cut out your shortbread shapes. Using a palette knife, transfer the shortbread to the prepared baking trays. Place the trays into the fridge and allow to rest for at least 30 minutes.

Preheat your oven to 180 degrees C (160 fan). Bake the shortbread for about 20 minutes until the edges are lightly golden and is firm to the touch. Allow to rest on the trays for about 5 minutes before removing to a wire rack to cool.

To make the icing take three small bowls and add 75g of royal icing powder to each.  Add a little water, a teaspoon at a time until you reach the desired consistency.  The icing should be smooth and runny but not watery.  Use your spoon to drop a thin line of icing on to greaseprook paper, it should hold its shape, if it spreads add a little more sugar, if it doesn’t run smoothly add a little more water.  Add a dot of food colouring to each bowl in your desired colour.  Place the icing in a piping bag and first pipe around the perimeter of the shortbread to create a barrier for the icing, then ‘flood’ the centre of the shortbread to fill it in completely.

Allow to harden for about 30 minutes then mix the cocoa powder with warm water and flick the mixture on to the iced biscuits with a pastry brush to create speckles.

Once the cocoa has dried, which should only take about 10 minutes, mix up a batch of royal icing with the final 75g of sugar, without any food colouring, and pipe a swirl across the middle.  Allow to harden and then enjoy!