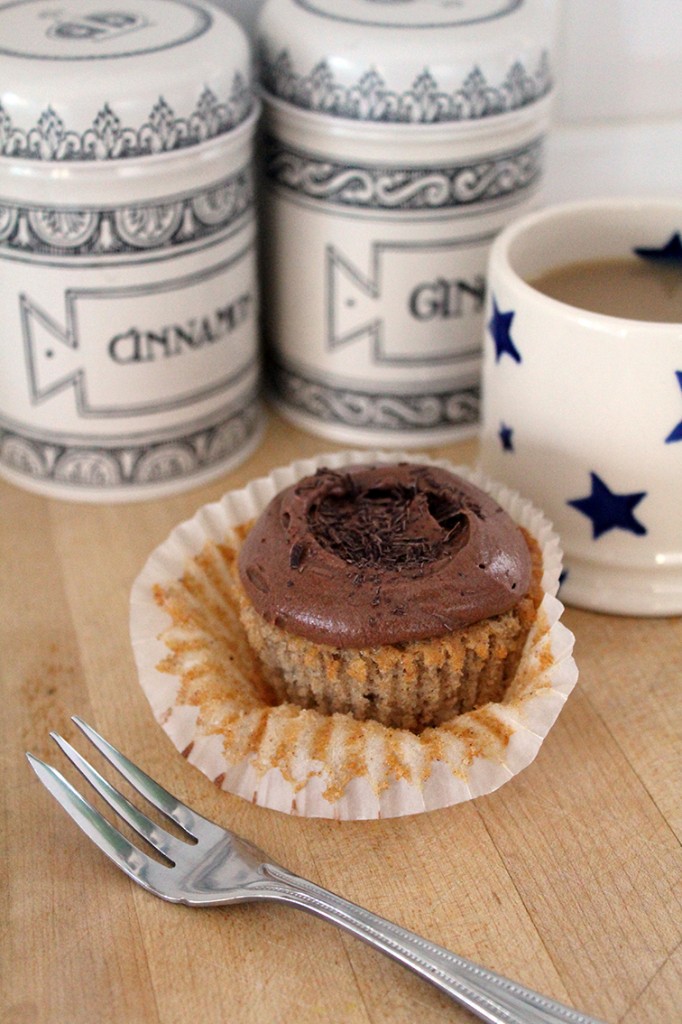 One of my first attempts at chocolate and banana cupcakes wasn’t quite as successful as the delightful looking treats you see here today.  I had brought some round to my friend Johns house for us to no doubt enjoy with a cup of tea…soggy is the word that springs to mind.  It didn’t help that I’d carried them around in a plastic tupperware box all day.  Wet, slimy chocolate frosting on top of overly moist banana cupcakes….not pretty.  I daresay they tasted fine, they were certainly eaten up, but nice to look at they weren’t. 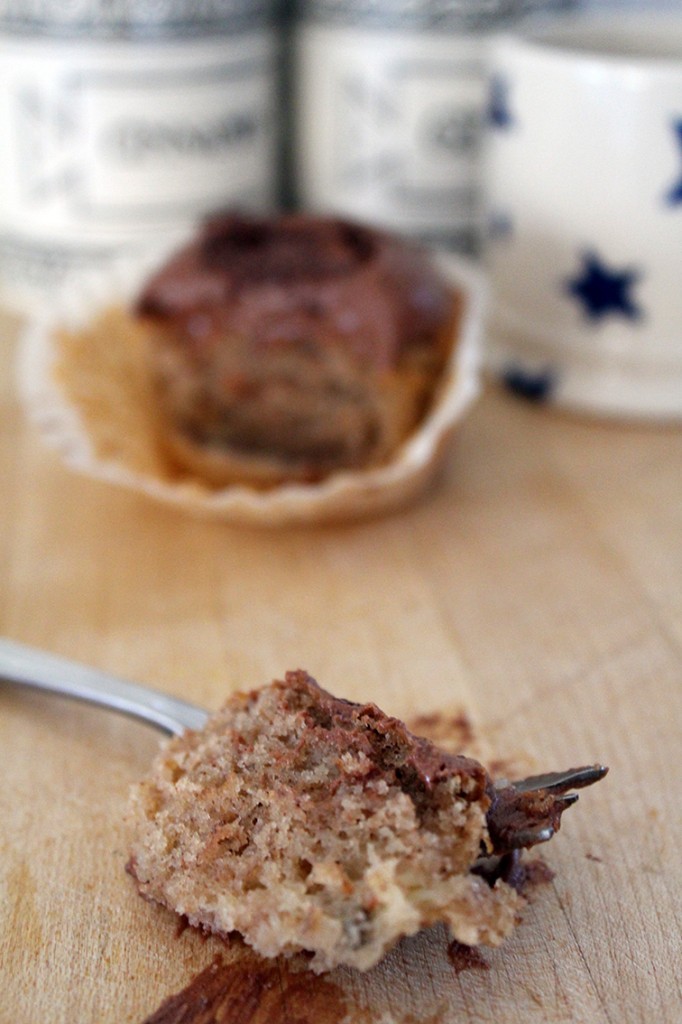 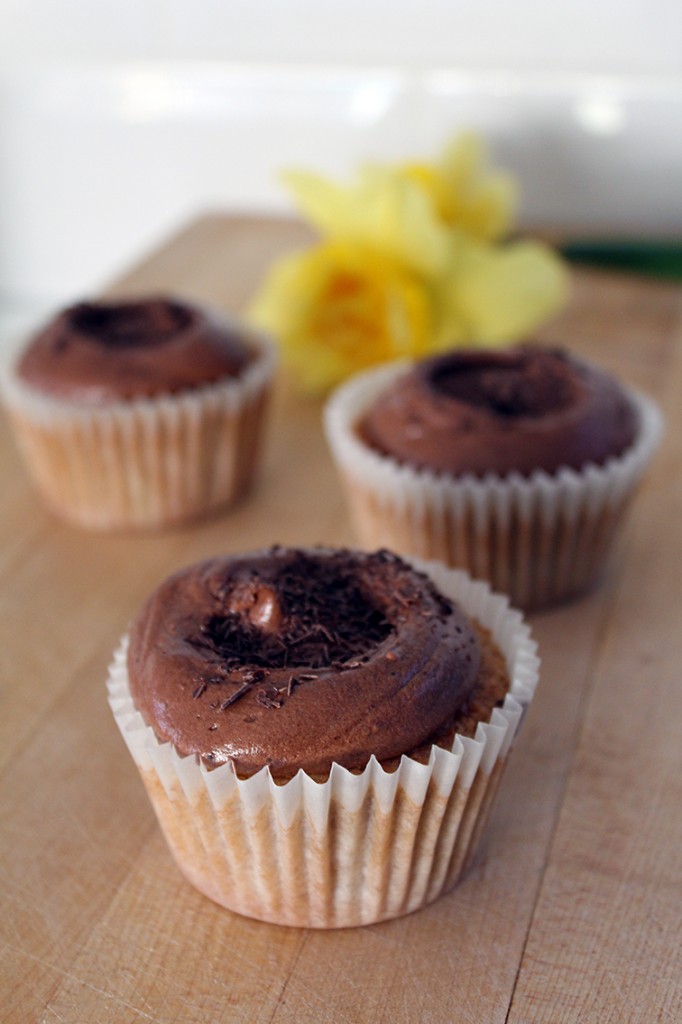 That was a good few years ago now, I’m pretty sure we were still at uni so at least four, and my baking (and storage) skills have progressed.  No slimy frosting here!  Just light, creamy and rich chocolate buttercream on top of lightly spiced banana cupcakes.  Yum!

The idea of putting Ovaltine in the chocolate frosting came from The Joy the Baker Cookbook and Joy’s recpe for the best chocolate frosting ever.  It gives the frosting a lovely smooth texture and the malty flavour from the Ovaltine is so subtle that you don’t exactly taste it but you would notice if it wasn’t there.  Give it a try if you happen to have some in the house.  I always do, it’s one of my favourite bedtime drinks! 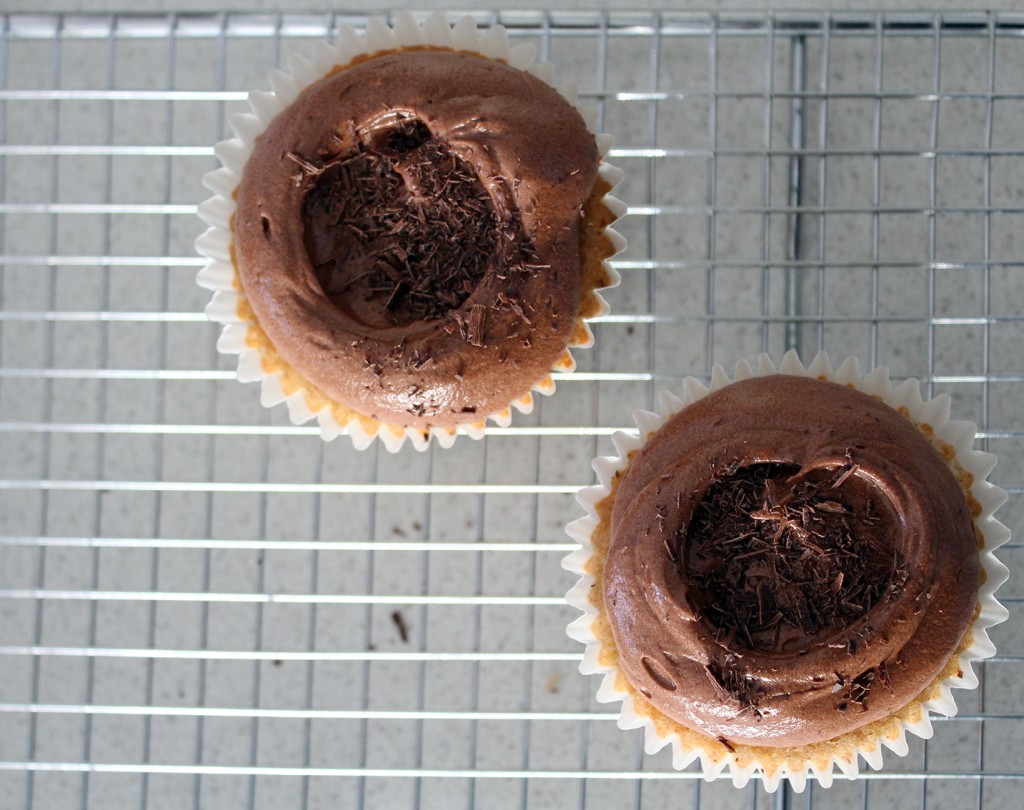 To frost my cupcakes I used a piping bag with a plain tip to pipe a blob (for want of a better word!) of frosting which covers the full cake – just hold the bag vertically and pipe smoothly, the frosting should neatly spread out.  I then used a small offset spatula to swipe a circular well in the centre, which is practical as it holds the sprinkles and it looks good too.  Simple but effective.

Preheat the oven to 170 degrees C (160 degrees C fan).  Line a cupcake tin with twelve cases and set aside.

To a large bowl , or the bowl of a stand mixer, add the flour, sugar, baking powder, spices and salt and whisk together.  Add the softened butter and mix slowly until the butter in evenly distributed throughout the dry ingredients and it resembles rough breadcrumbs.  Add the milk slowly, mixing on low to medium speed until everything is well mixed.  Add the eggs and mix until combined, making sure to scrape down the sides of the bowl.  Fold in the banana until evenly distributed.

Split the mixture between the twelve cases and bake for 18-20 minutes, until the cupcakes are golden brown, springy to touch or a skewer inserted into the centre comes out clean.  Immediately remove cupcakes from the tin and allow to cool on a wire rack.

Whilst the cupcakes are cooling, make the chocolate frosting.

In a small bowl, mix together the Ovaltine and milk until smooth, set aside.

In a bowl, or the bowl of a stand mixer, add the butter and beat until pale, soft and light.  Add half of the icing sugar, the cocoa powder and the milk mixture and beat on low until completely combined.  Add the remaining icing sugar and mix on low until incorporated then increase the speed and beat for 3-4 minutes until frosting is smooth, light and fluffy.

Once the cupcakes are cooled spread or pipe the frosting on top. Decorate with the chocolate shavings.