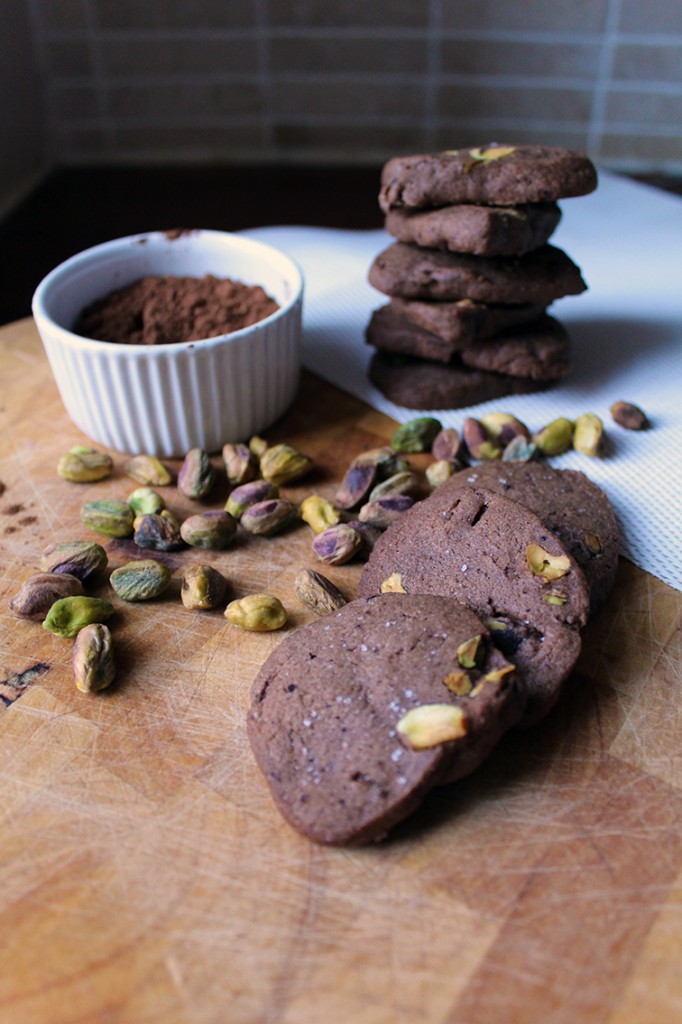 In contrast to the complicated croissants, here we have some simple biscuits.  Chocolate and pistachios are a favourite flavour combination of mine, particularly with a little sprinkling of sea salt to set the whole thing off, yum! 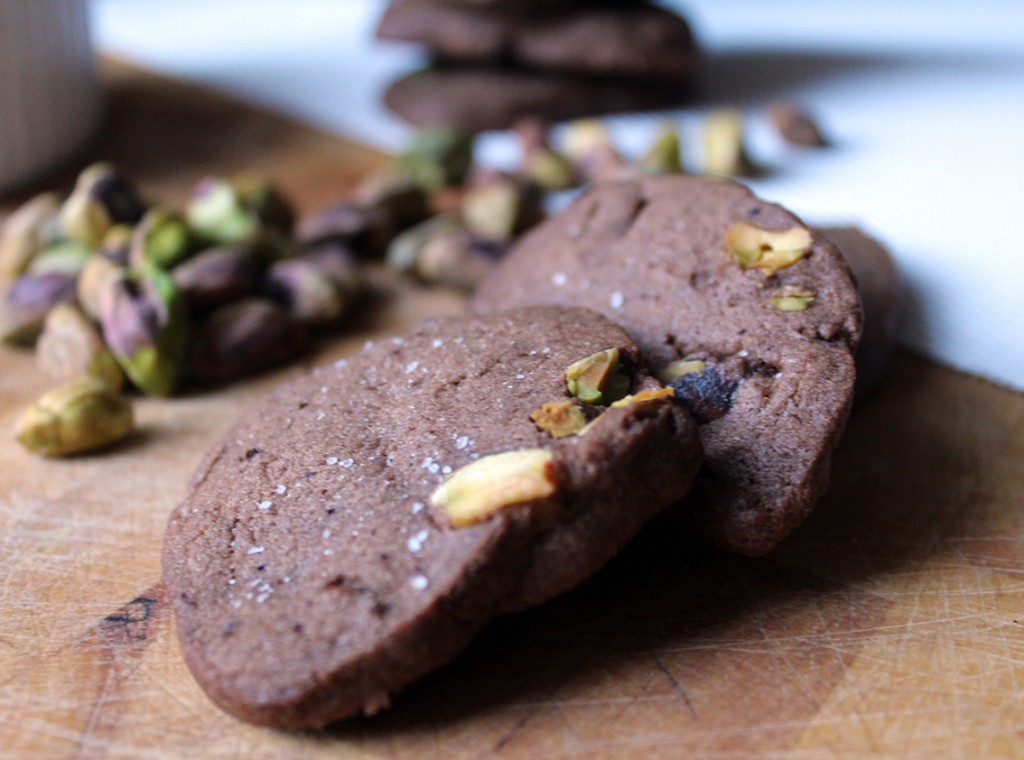 These slice and bake biscuits come from a gorgeous, and relatively new, cookbook of mine called ‘A La Mere de Famille’ and is a collection of stories and recipes from a French chocolatier.  It’s a beautiful book to look at and filled with lovely sweets, cakes and biscuits, but the two sections I’m most looking forward to diving in to are ‘Jams and Spreads’ and ‘Recipes from the Ice-cream Maker’.  Crunchy chocolate almond spread is definitely in my future and as soon as summer hits I’m making Chocolate-Caramel Popsicles (which seem to be like posh Magnums). 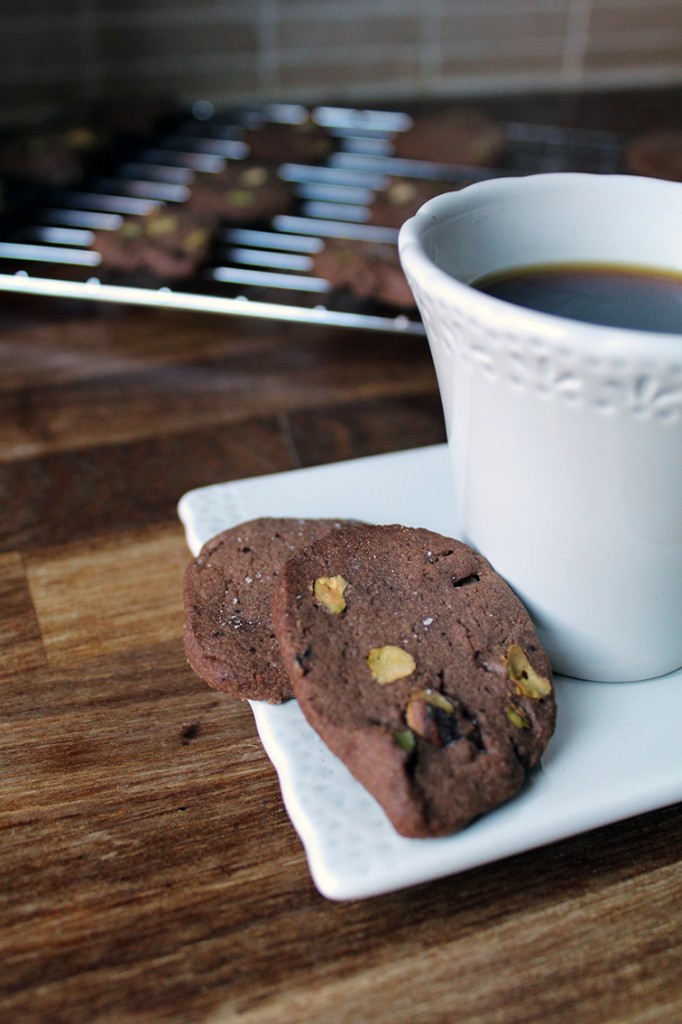 Only a few ingredients lie between you and tasty biscuits! 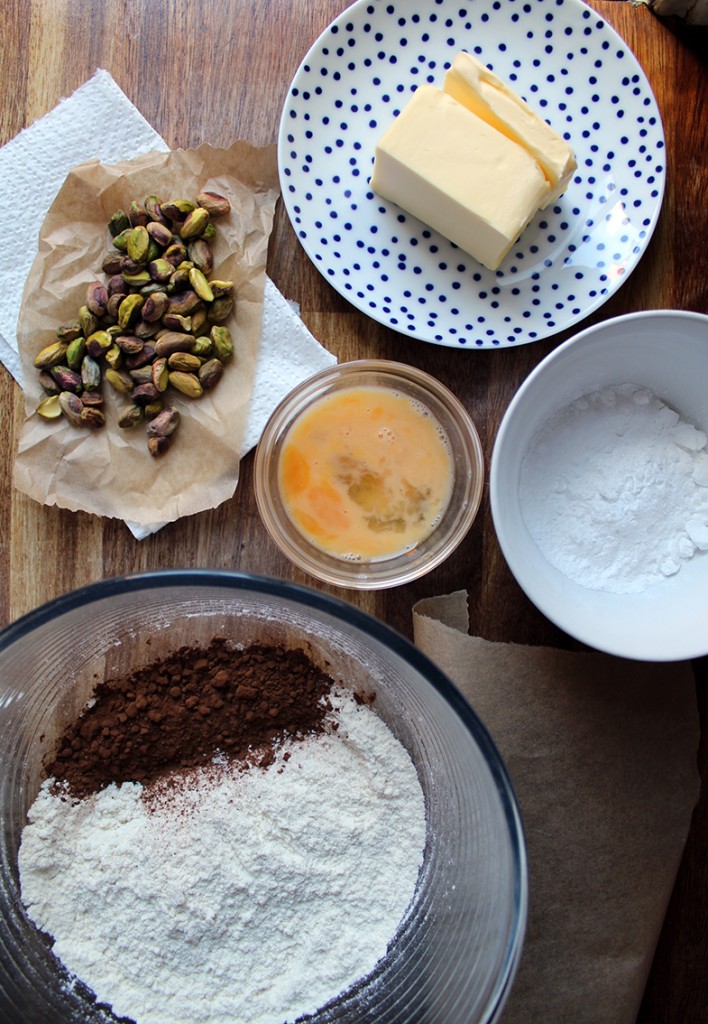 I don’t often sift flour, whisking does the job, but the French cookbook told me to so I didn’t question it! 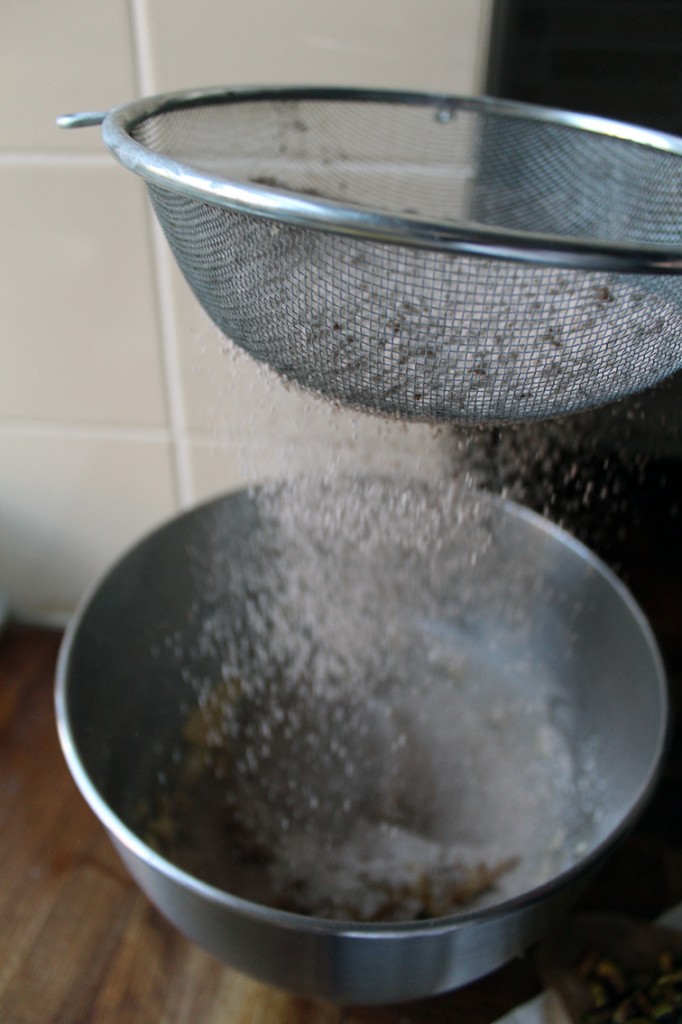 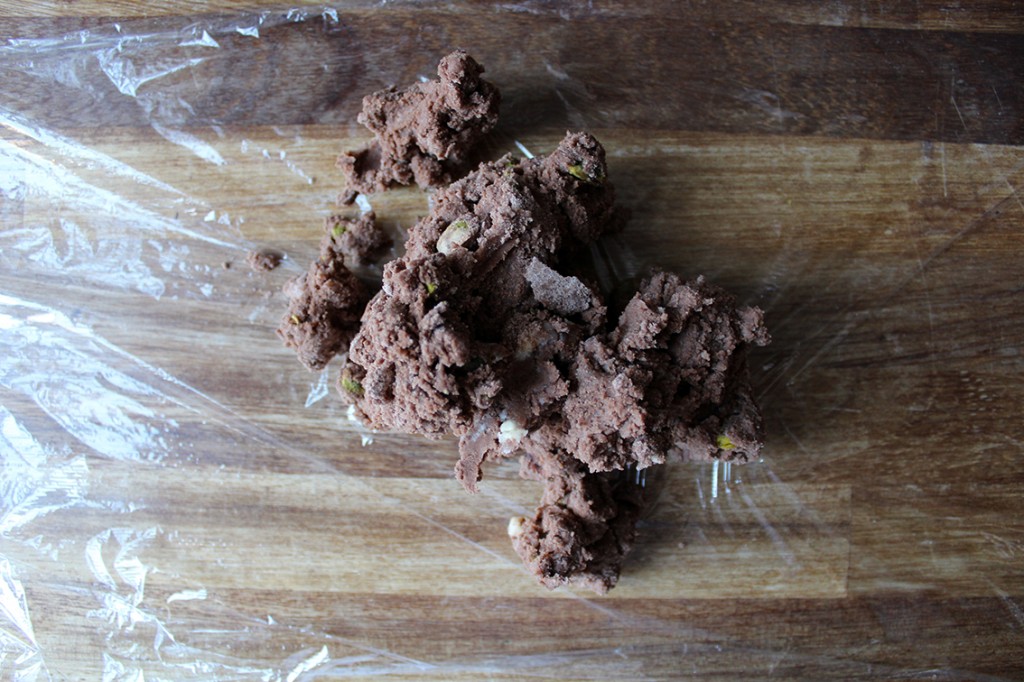 If you actually have sharp knives you will get on a lot better than I did and your cookies will be circular. 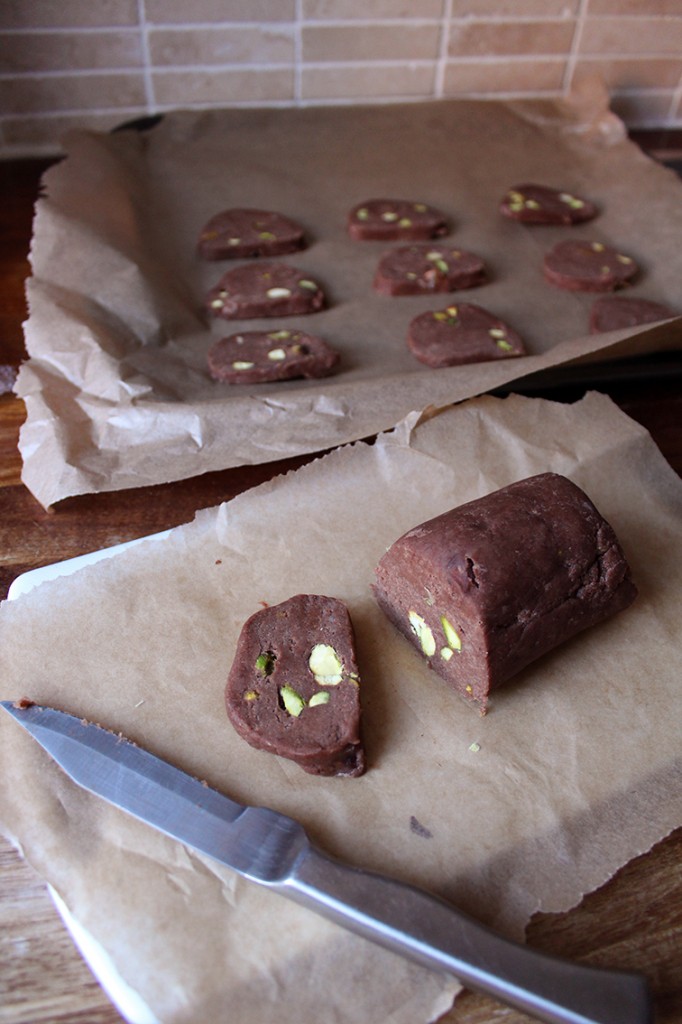 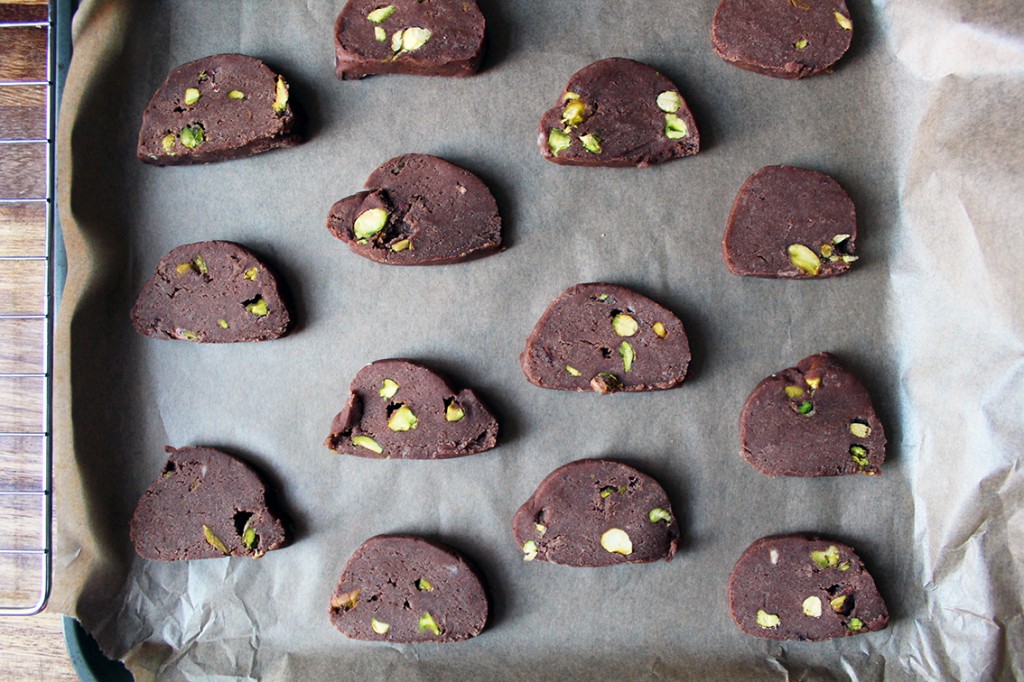 After baking…see they don’t change much. 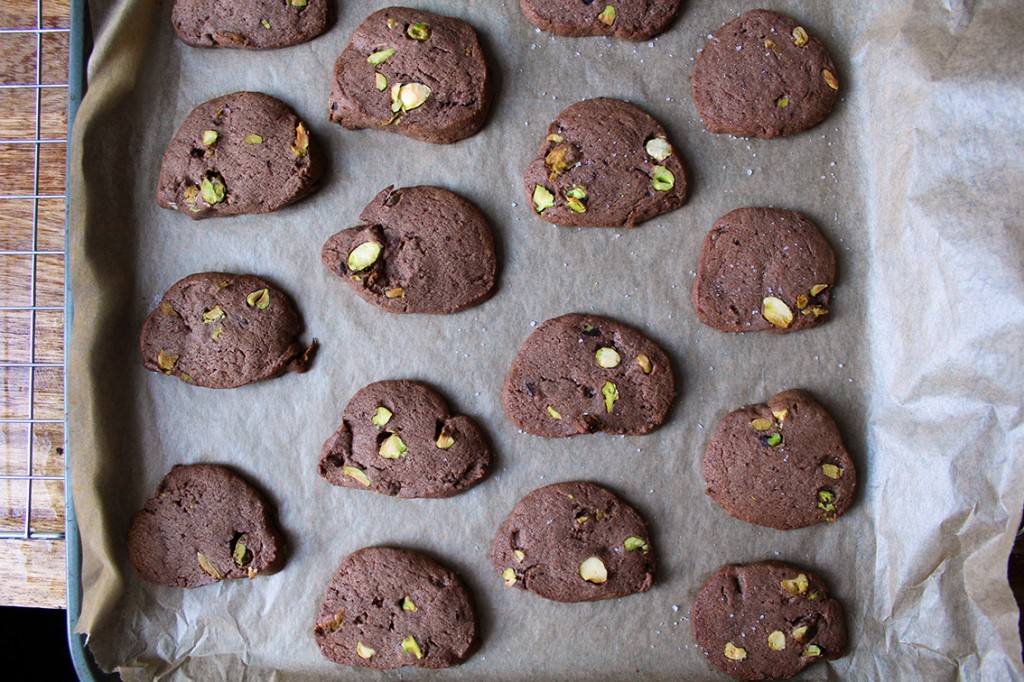 In a large bowl, or in a stand mixer, beat the butter, icing sugar and salt until combined – no need to beat until fluffy.  Slowly mix in the egg.  Sift in the flour and cocoa powder and mix on slow speed until almost combined.  Add the pistachios and mix until all ingredients are just incorporated.

Tip the mixture out on to cling film and bring  the dough together.  Form the dough into a sausage shape, about 5cm in diameter then wrap with the cling film.  Chill in the fridge for an hour.

Preheat the oven to 190 degrees (170 degrees fan).  Line two to three baking trays with greaseproof paper and set aside.

When the dough is firm, unwrap and place on a chopping board.  Slice the biscuits to a thickness of 0.5cm and arrange on the baking tray.  The biscuits won’t change shape much in the oven so you only need to leave about 4cm between them.  Sprinkle the biscuits with the sea salt and place in the oven to bake for 12 minutes, until firm to touch.

Remove from the oven and allow to cool on the trays for ten minutes before placing on a wire rack until cold.