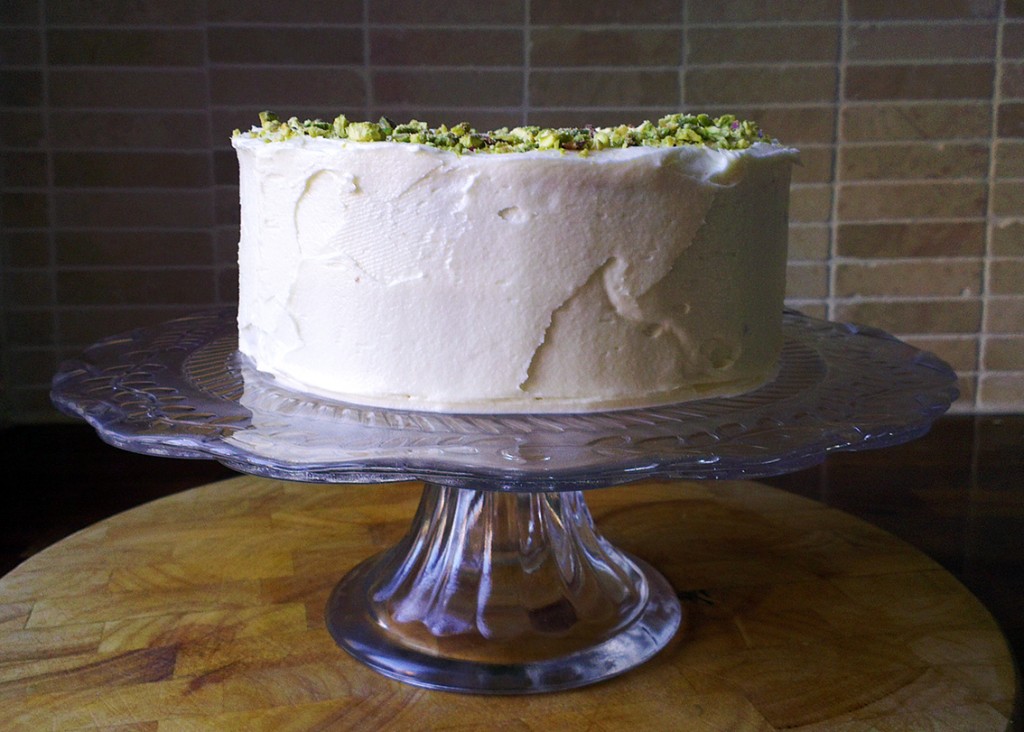 This pretty pistachio cake was made at the weekend for my mums birthday, which is today.  Don’t worry, I’m not giving her a really stale cake for her birthday, we celebrated when she and my dad visited on Saturday.  We had a lovely evening, a quick late afternoon wander around the shops then to Browns on George Square for dinner, where I had an amazing coconut and cardamom brioche and butter pudding. 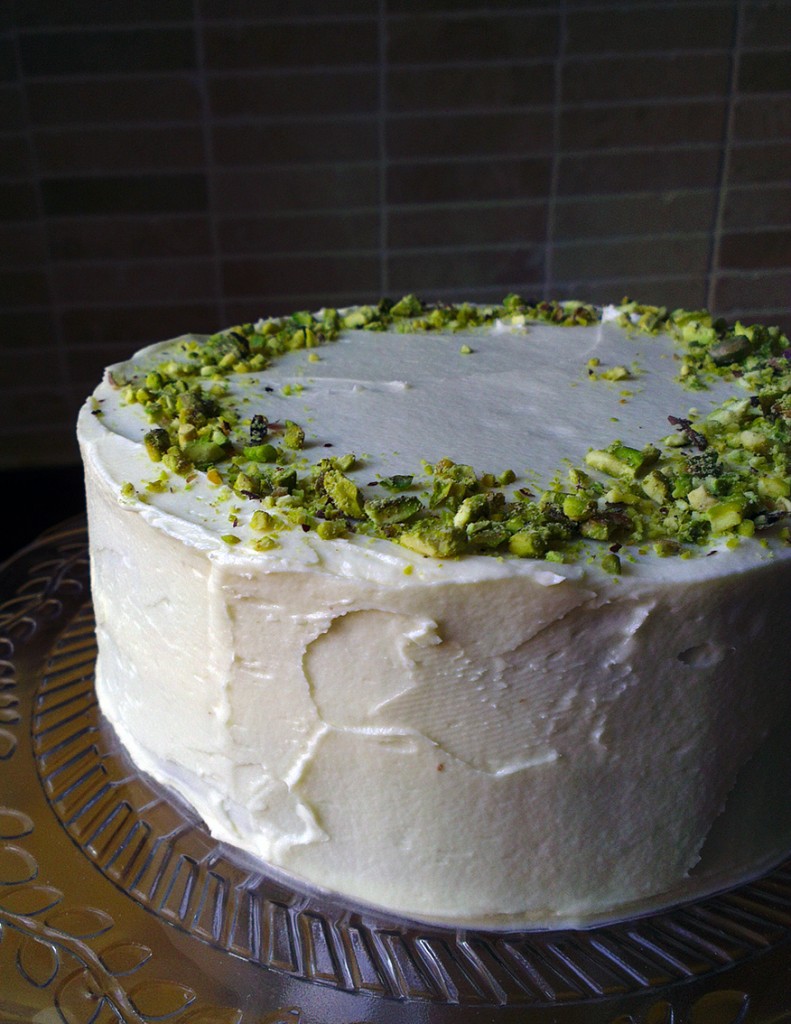 So this post is for you mum.  The most wonderfully caring, supportive and awesome mum a girl could ask for and I hope you have had a wonderful day (even though I wasn’t there!). 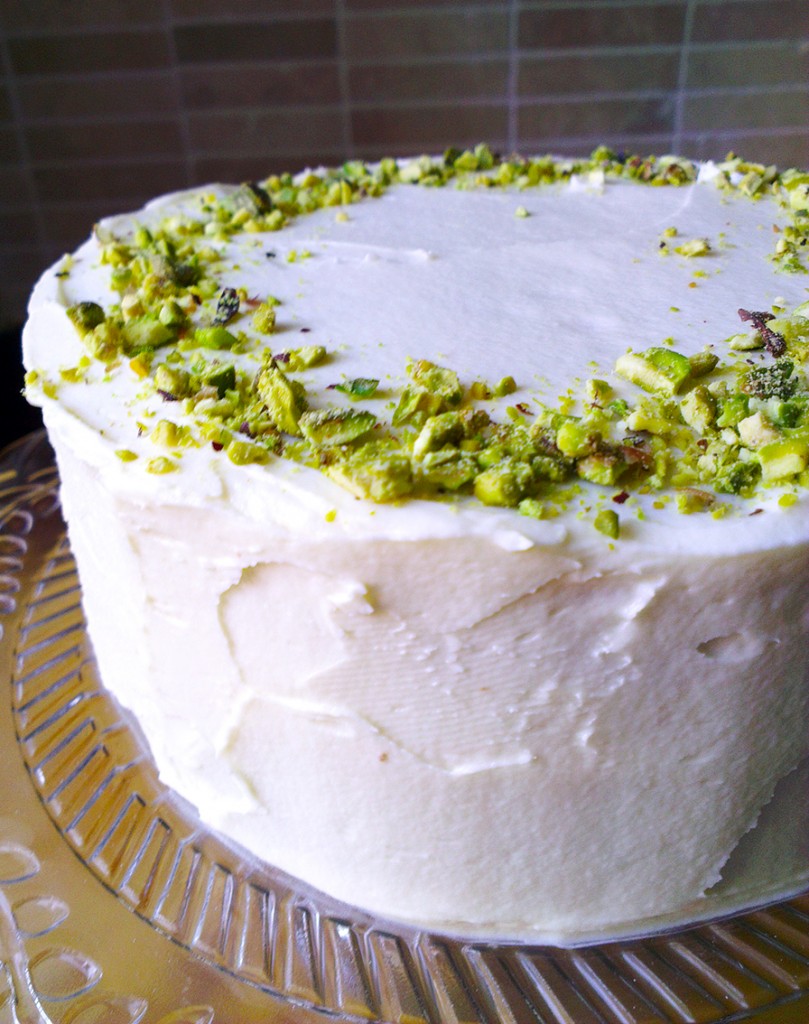 As it was for a special occasion I turned the original loaf recipe in to a cake, added a filling and decorated it.  I was going for classy and sophisticated, and didn’t want the cake to be overwhelmingly sweet, so chose a dark chocolate and sour cream ganache filling and a plain buttercream on the top and sides. 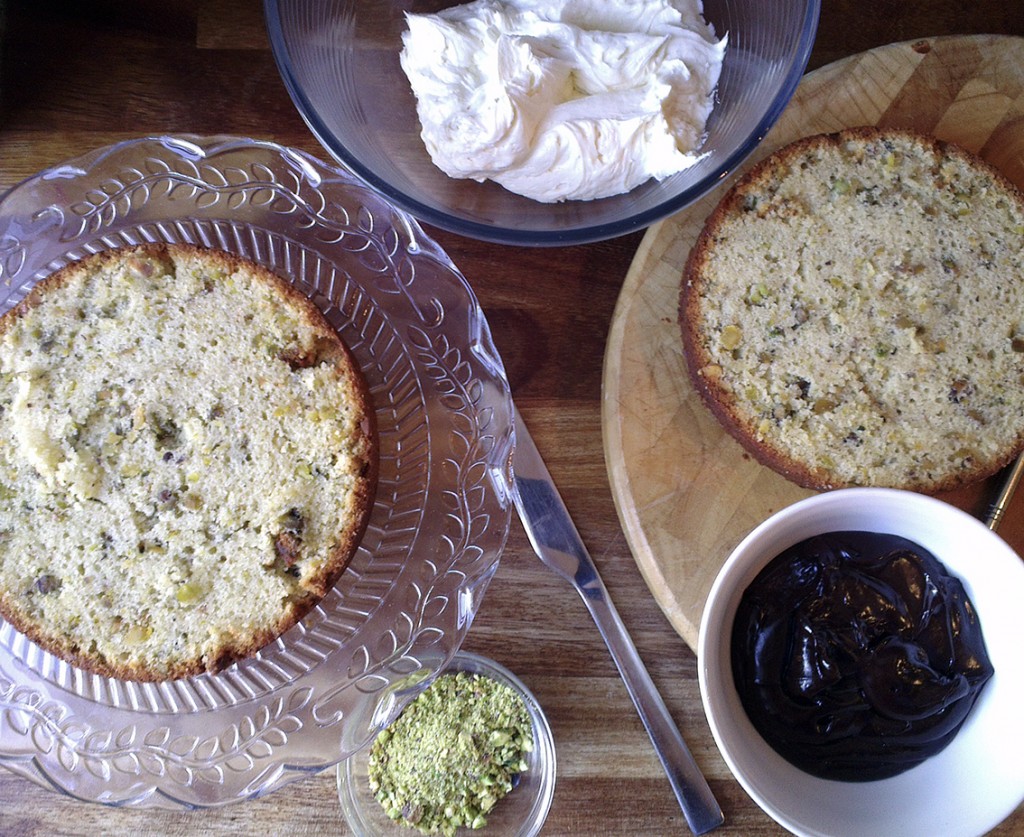 The cake itself is dense and moist, thanks to the sour cream, and the pistachios lend a very delicate flavour and great texture.  The slightly bitter, tangy ganache filling perfectly balances out the sweet buttercream icing.  I’m extremely taken with the decoration on this cake, simple and effective.  Perfect! 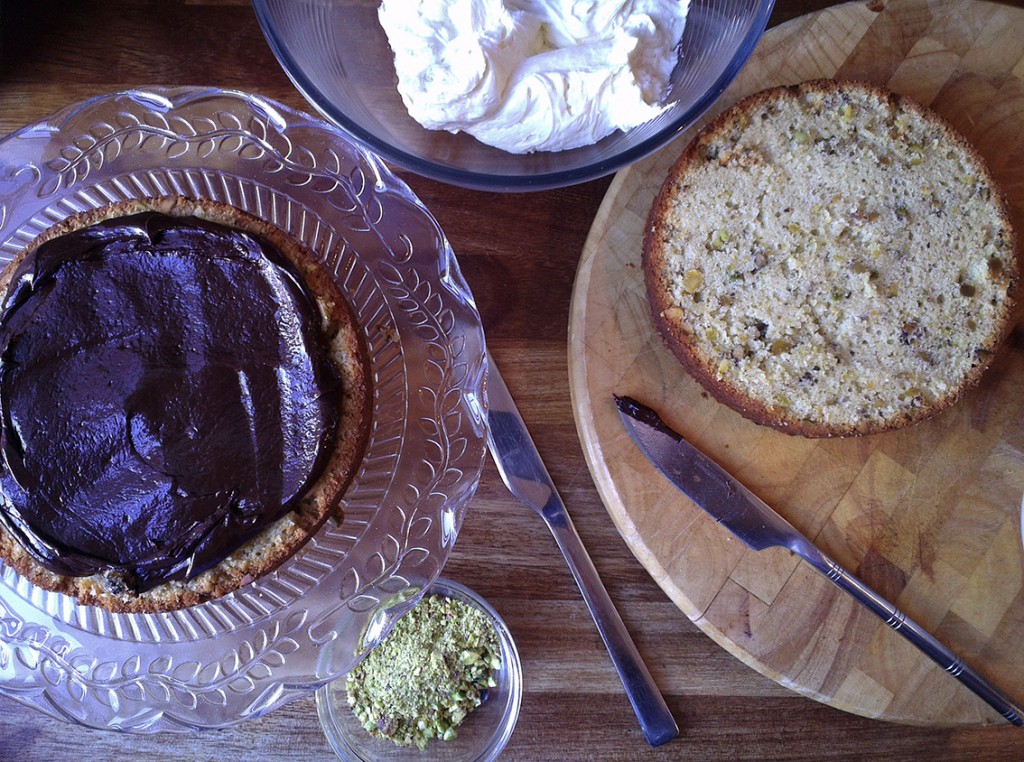 The only thing about this cake that wasn’t perfect was the fact that I sorta overcooked it, meaning it had a little more texture (read crispy crust) than desired.  I know where I went wrong though. I only have one deep 15cm cake tin, so instead of halving the mixture and baking it twice I put the whole lot in and through I’d just cut it in half.   As a result I had to cook it a bit longer to make sure the centre was finished.  Lesson learned.  Don’t be a lazy baker! 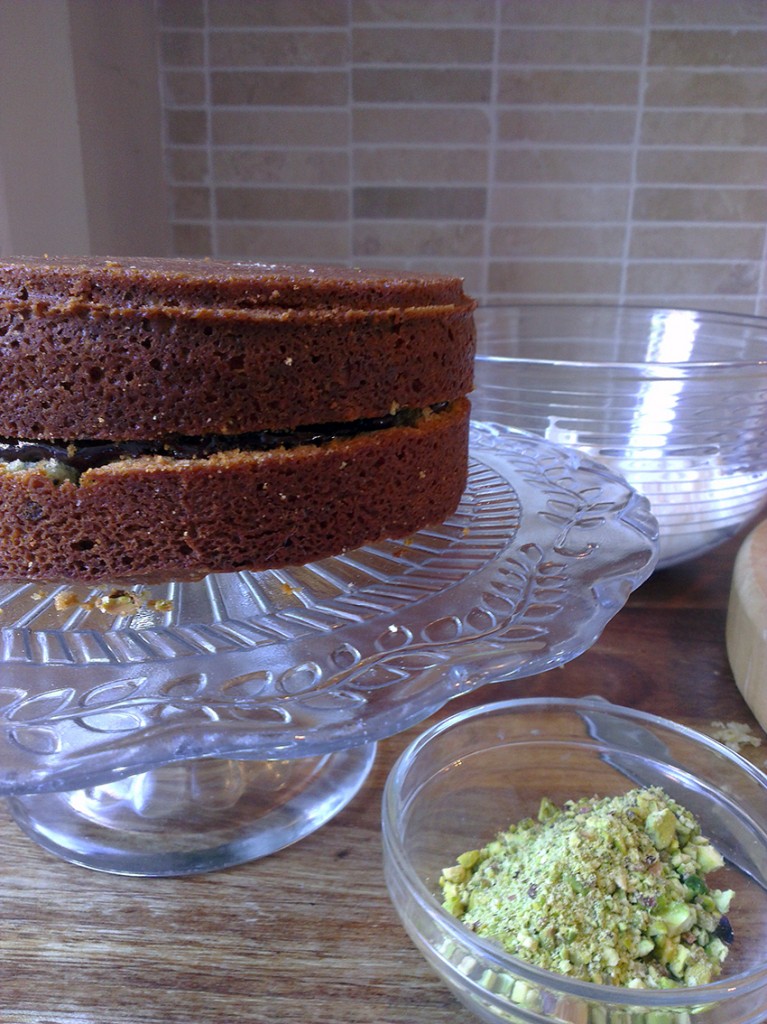 This is quite a substantial sponge which makes icing it a breeze. 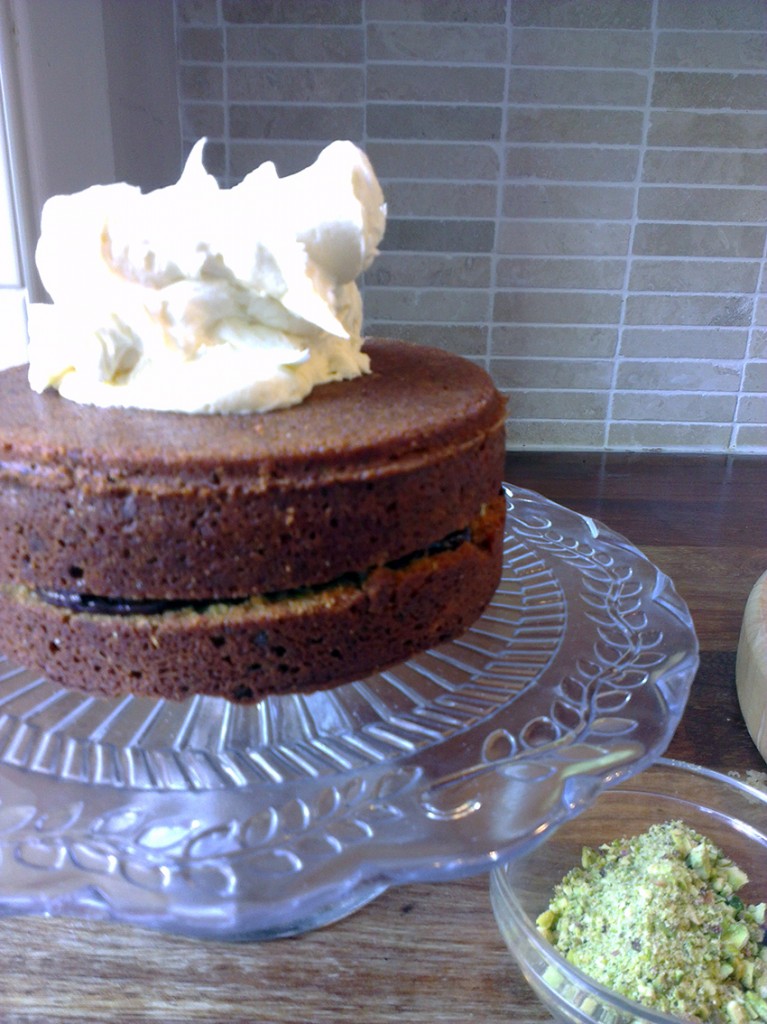 To grind up the pistachios for the topping you could use a food processor, spice grinder or do what I did and use a large bowl and a rolling pin! 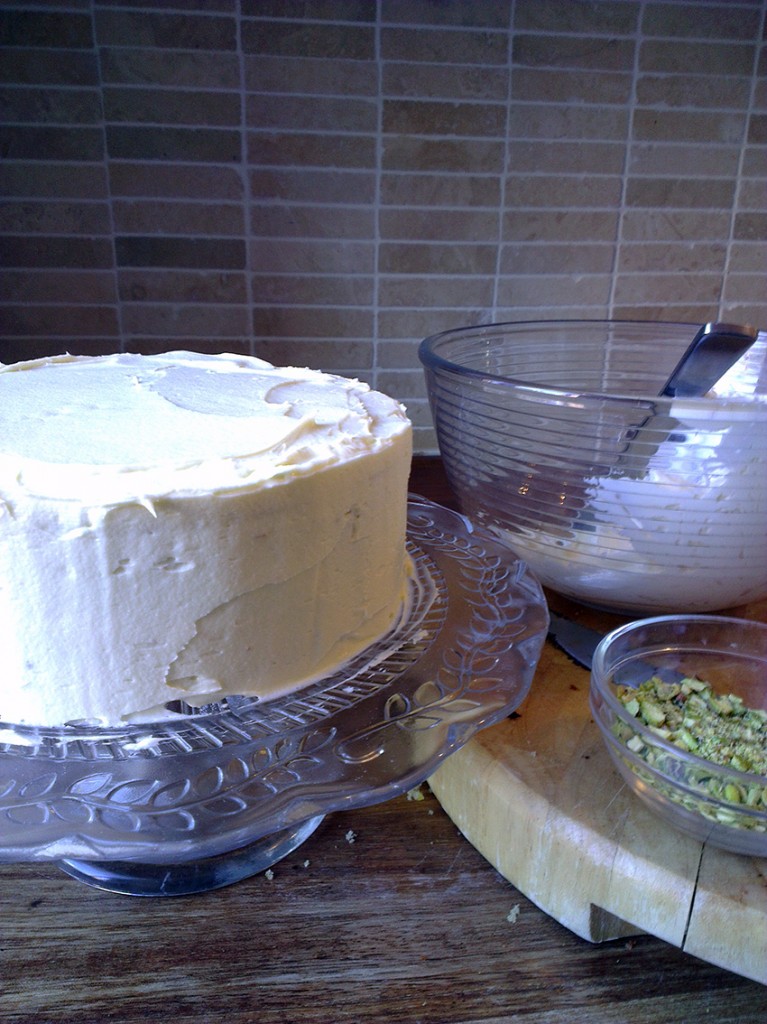 The double cream in the icing means it doesn’t need quite as much icing sugar to give it body and to hold its shape.  It also gives it a delightful light texture. 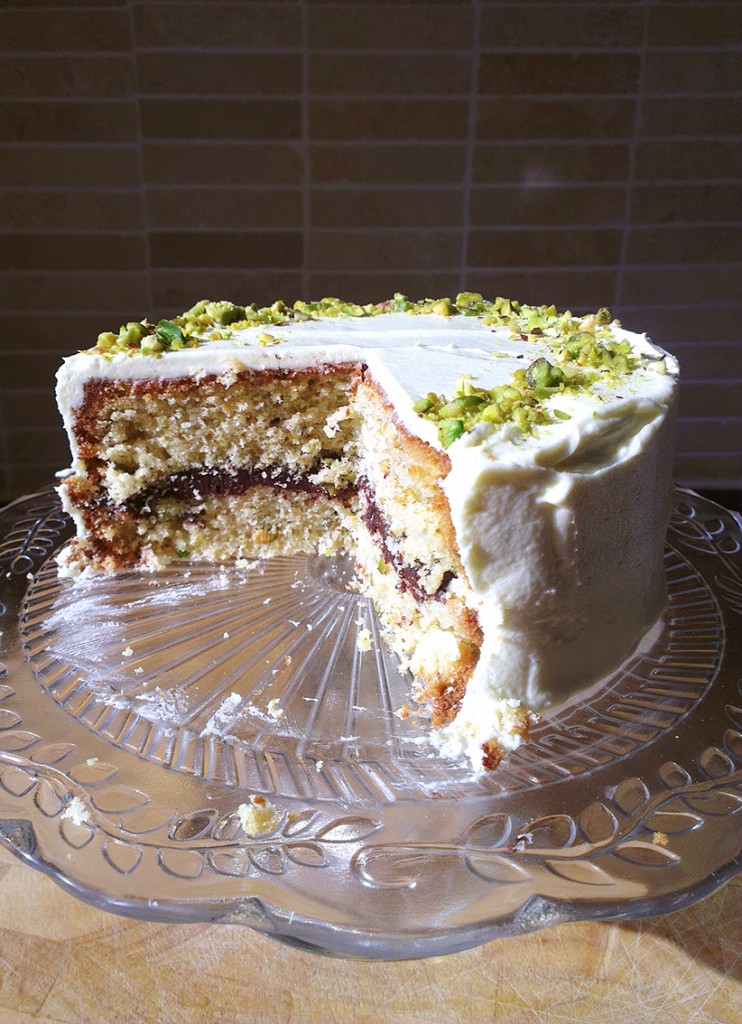 For the sponge:
Recipe from Cake Days

For the ganache:
Recipe adapted from Not Without Salt

Preheat the oven to 170 degrees C.  Grease and line the base of two 15cm cake tins.

In a bowl, whisk together the flour, baking powder and salt.  Set aside.

In a stand mixer, or in a large bowl with a hand mixer, beat together the butter and sugar until pale and fluffy.  Add the eggs one at a time, beating for about a minute after each.

In three batches, slowly beat in the flour mixture.  Followed by the sour cream.

By hand, fold in the chopped pistachios.

Divide the batter evenly between the two cake tins and bake for 25-35 mins, until golden brown and a skewer comes out clean from the centre of the cake.

Remove from the oven and the tins, then allow to cool on a wire rack.

While the cakes are cooling, start on the chocolate ganache.

In a bowl set over a pan of simmering water, gently melt the chocolate chips.

When completely melted, turn off the heat but leave the pan over the water.  Mix in the sour cream, until the mixture is smooth and there are no lumps.

Add in the sifted icing sugar and beat using an electric hand mixer until you achieve a smooth consistency.  Set aside to cool.  The ganache will remain soft and spreadable for about an hour.

To make the buttercream beat the butter until light and pale.  Add in one cup of the icing sugar and the vanilla essence and beat, slowly at first and then on high.

Add in the cream and remaining icing sugar and beat on high until light and fluffy.

To assemble the cake.

If required, flatten off the tops of your cakes using a serrated knife.

Place one cake flattest side down on a cake stand/board/plate and spread a generous layer of ganache on top.  Don’t take the ganache too close to the edges so that when you cover the outside of the cake it won’t mix with the buttercream.

Place the second cake on top, flattest side up.  At this stage you can give your cake a crumb coat, where you would cover it with a very thin layer of icing then leave to set in the fridge for about an hour, before properly icing the cake.  This will avoid any crumbs getting in to the final cover and give you a crisp, clean look.

Cover the cake with icing on the top and sides, starting with the sides and finishing on top.  This can be as neat or as rustic as you fancy.

Top with some crushed pistachios.