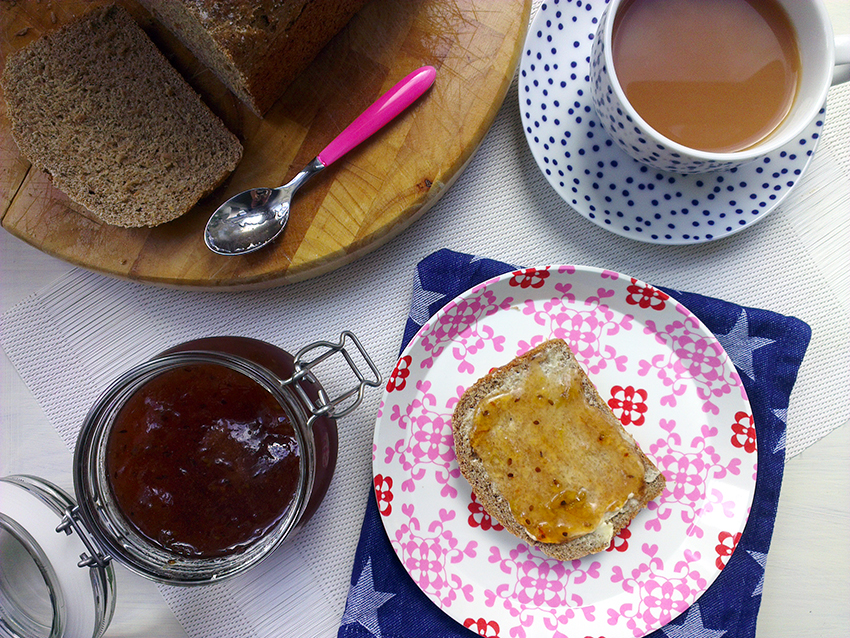 Does anyone remember The OC?  Well, I sincerely hope you do or I have extremely young readers!  I’ve been having a bit on an OC revival recently.  One of my friends lent me the boxset, all four seasons on DVD!  This week, whilst I’ve been on my own in the flat, I’ve been enjoying an episode of season 4 before bed.  My love of Seth Cohen has come flooding back, I must say (his sarcastic, emo ways, checked shirts and curly hair get me every time) as well as my desire to upsticks and move to a California beach…sigh. 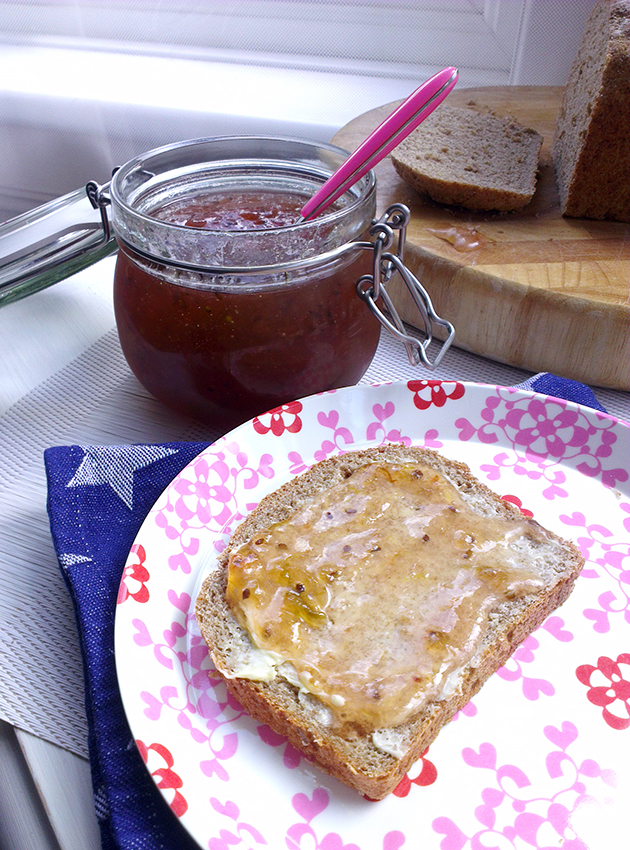 Anyways, the reason I’m rabbiting on about The OC is because my bedtime snack to accompany my DVD watching has been wholemeal rye toast (recipe later this week)  and gooseberry jam. A combination destined to be together, just like Seth and Summer…ok, I’ll stop! 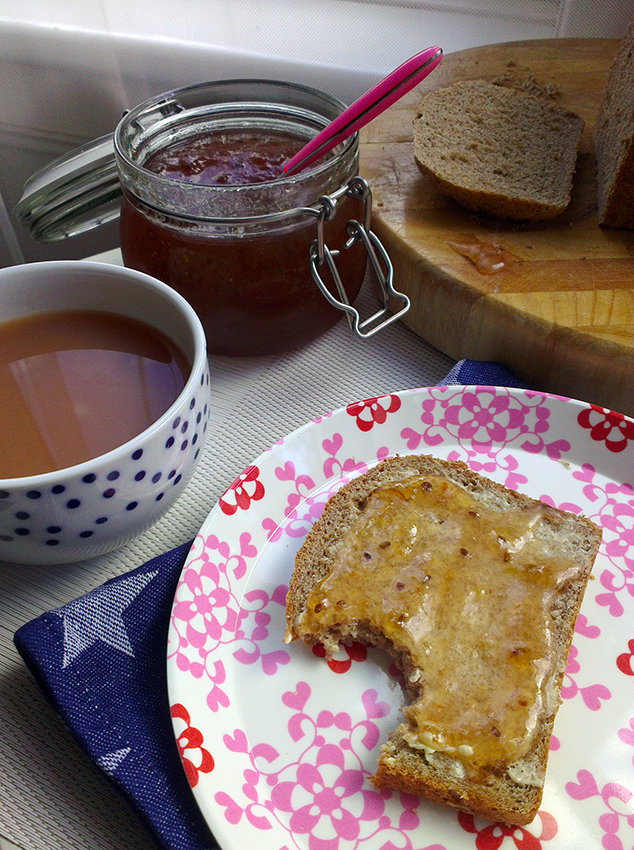 This jam is sweet but tart, the gooseberries hold their shape a bit to give just enough texture.  I can only remember having gooseberries in yogurt before (Morrisons Gooseberry Fool is a-mazing) and have never cooked with them.  This jam was a definitely success, I’ll have to try a gooseberry pie next I think. 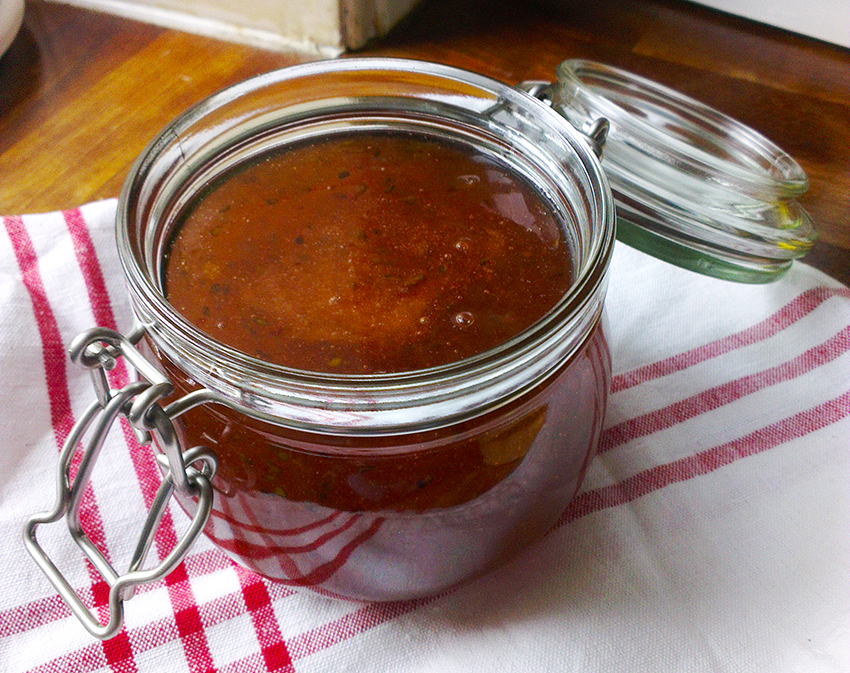 At the weekend I went fruit picking again.  The plan was to pick the gooseberries but it was raining and there was a lovely pre-picked tub just waiting to be bought, I did pick my own raspberries however, only because it was nice and dry under their cover.  For a change, this time we headed over to Broadslap Farm, just south of Perth.  The staff were really helpful and there is a lot of choice for pick your own or ready picked.  I would recommend it.

Prepare the gooseberries by topping and tailing them. 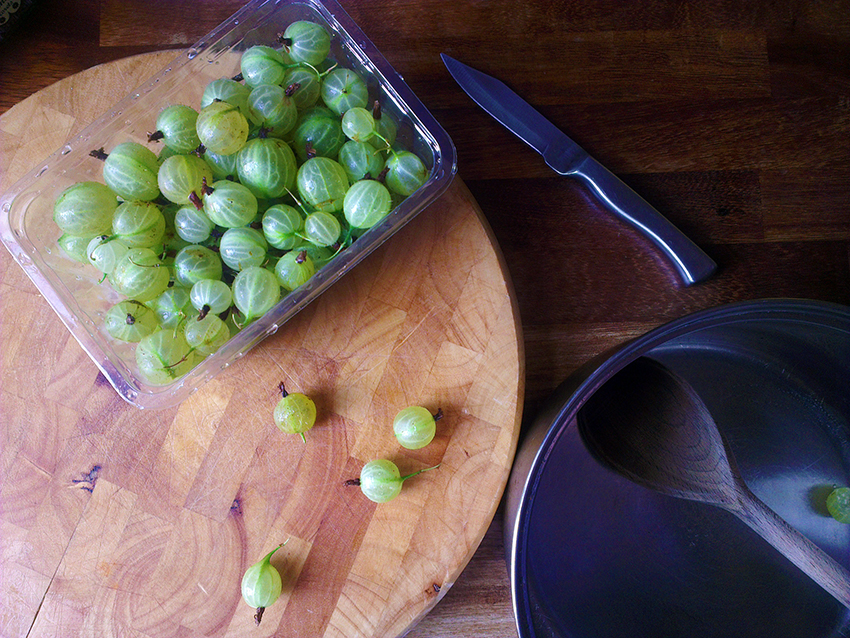 Once the gooseberries are soft stir in (a lot) of sugar. 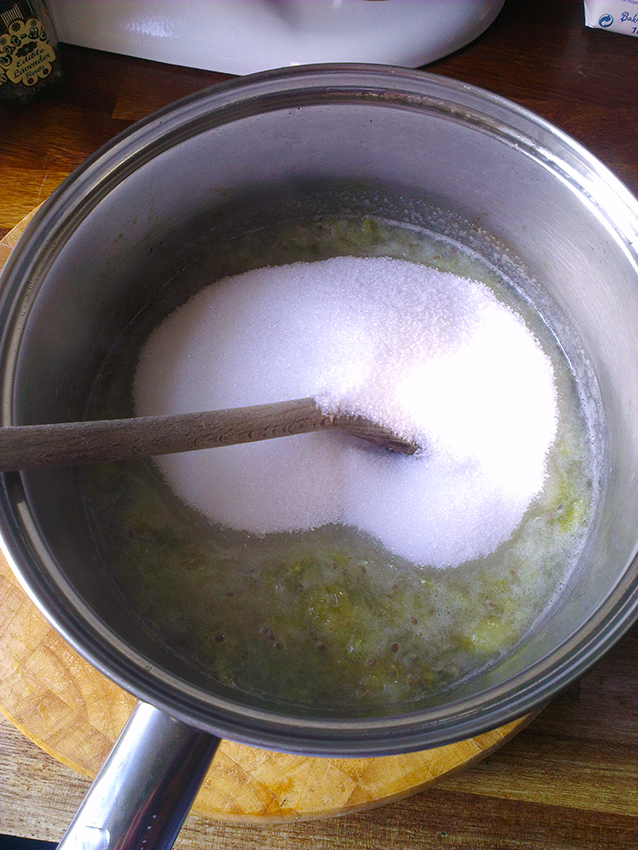 It took a few goes to get the set on the jam.  The first go was too runny. 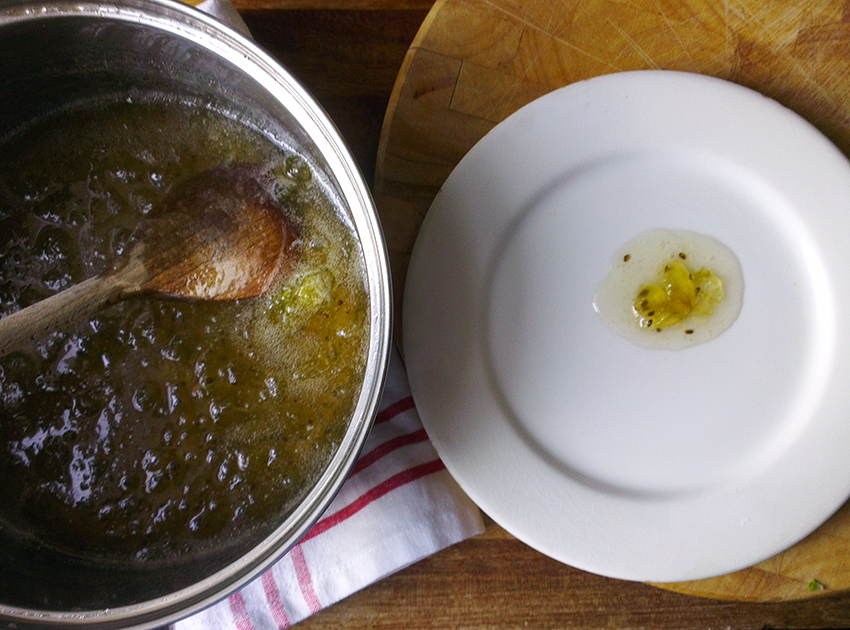 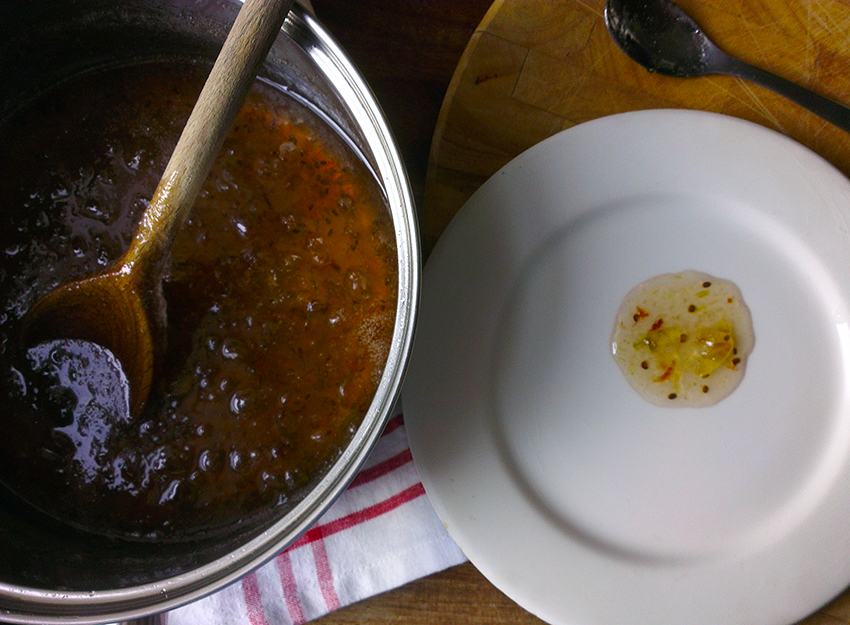 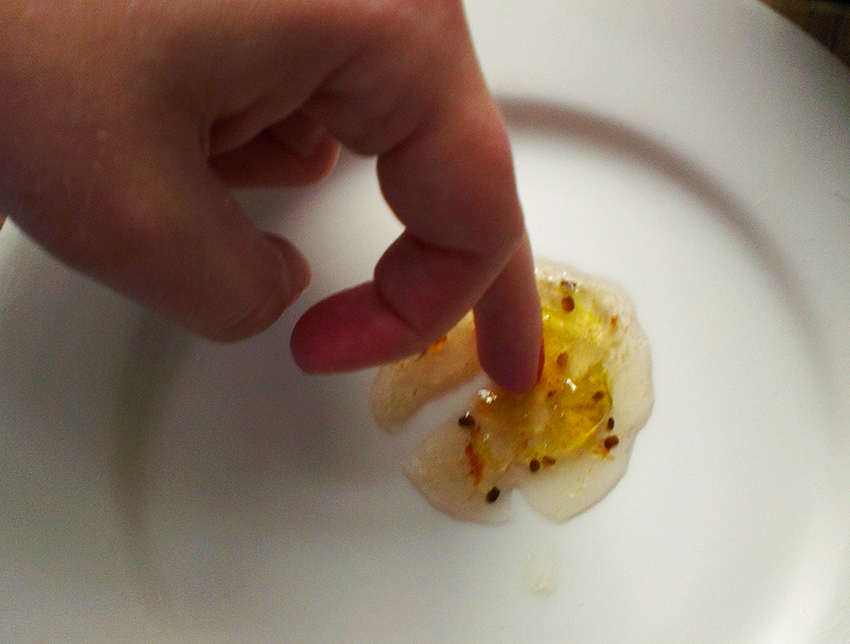 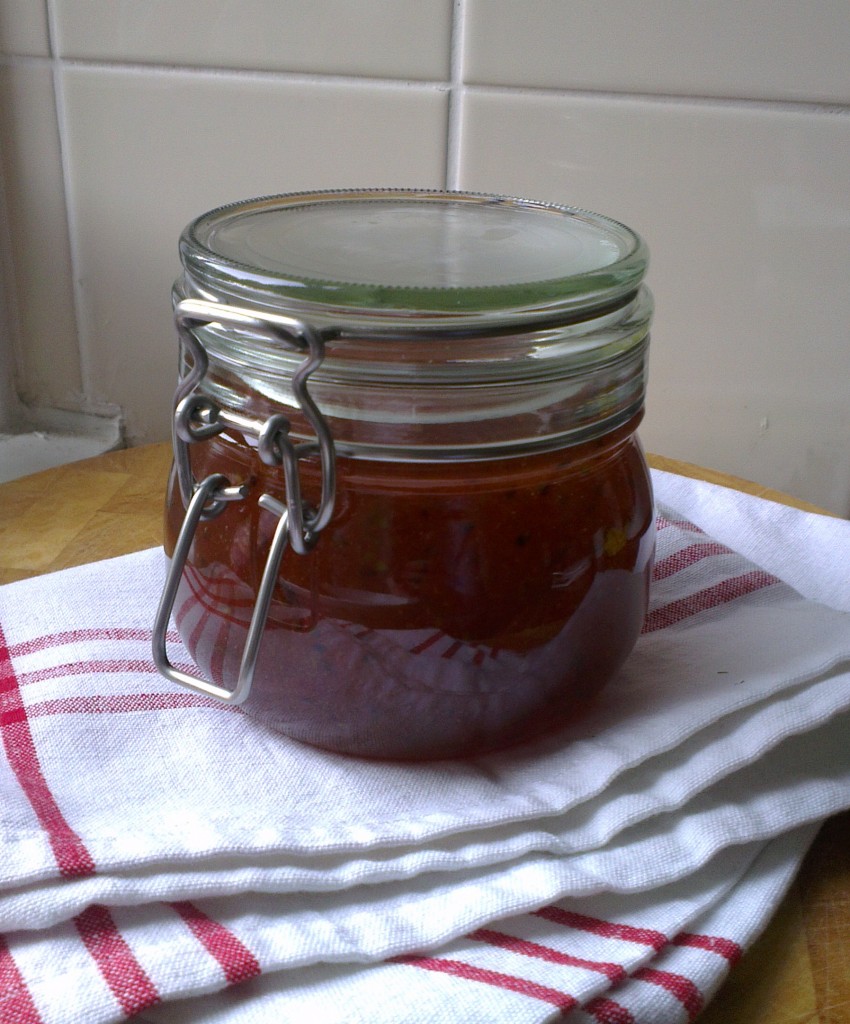 makes 1 500ml jar but can be multiplied as desired

First place a saucer in to the freezer, we’ll use this later for testing the jam.

To prepare the gooseberries first give them a wash, then cut of the top and bottoms.

Add to a large pan with the water and bring to a boil.  Reduce the heat to a simmer and cook for about 10 minutes, until the fruit has softened.

Stir in the sugar and cook over a low heat until the sugar has dissolved.

Turn up the heat and boil rapidly for another 10 minutes.

To test if the jam is ready remove the saucer from the freezer and the jam from the heat.  Dollop a teaspoon on jam on to the saucer and leave for a minute, then run your finger through the puddle of jam.  If the jam wrinkles and leaves a defined path then it is ready, if if all runs together again return to the heat and boil for another few minutes.

When the jam is ready remove form the heat and stir in a knob of butter to remove any scum that has formed.  Leave to sit for 20 minutes.

Ladle the jam into sterilized jars* and seal tightly whilst hot.  Allow to cool before storing or eating.

*To sterilize the jars, first wash in hot soapy water, rinse and allow to drip dry.  Place jars on to a baking tray and place in an oven at 140 degrees C for half an hour.