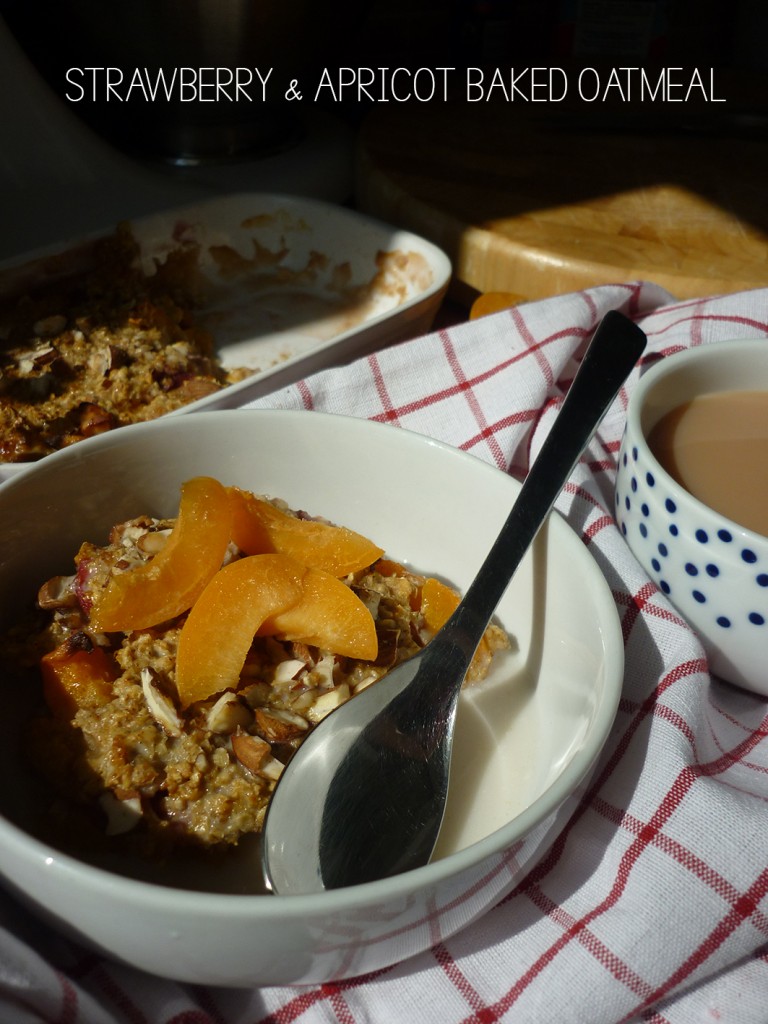 Breakfast is probably my favourite meal.  I’m one of those annoying people that tells you off for not eating breakfast because ‘it’s the most important meal of the day’.  I have many favourite breakfast dishes, if it’s the weekend then it’s pancakes, if I’m on holiday in the US it’s french toast, if I’m on holiday in the UK it’s a full english, or if it’s a normal work day it’s porridge. 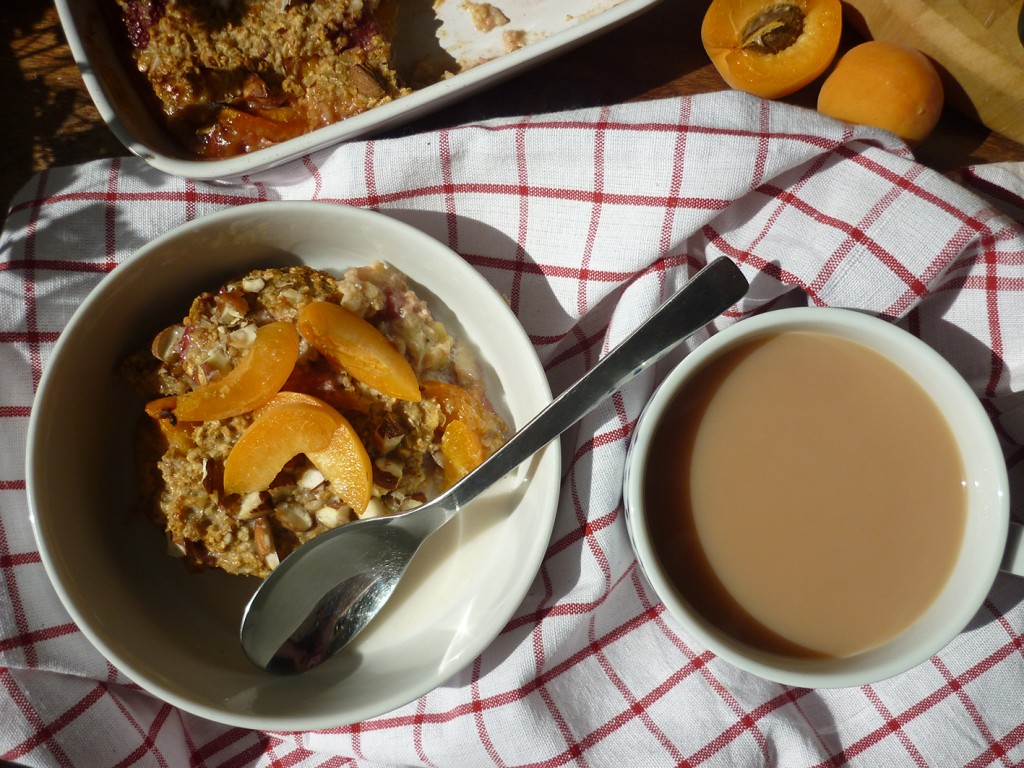 Rain or shine, chilly or toasty (although lets face it, the weather here is never ‘toasty’ especially in the mornings) I am happy to eat porridge for breakfast.  Always cooked on the hob, never in the microwave, with banana, maple syrup and berries. Hearty, healthy and delicious! 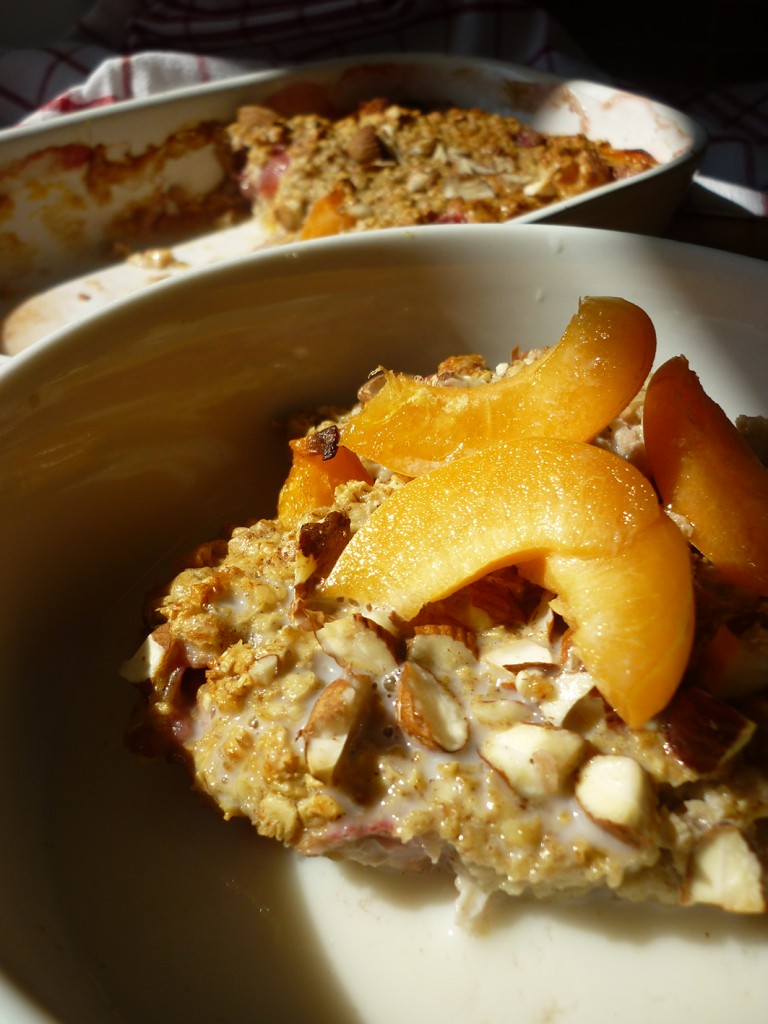 It doesn’t always seem appropriate to eat porridge in the summer, even though I always do, but the flavours in this baked oatmeal are summery enough to make it seem ok.  This baked oatmeal recipe is perfect if you want a weekend change from porridge.  It’s really simple and because it takes about 40 mins to bake, you can assemble it, pop it in the oven and it will be ready to eat when you’re showered and changed – perfect! 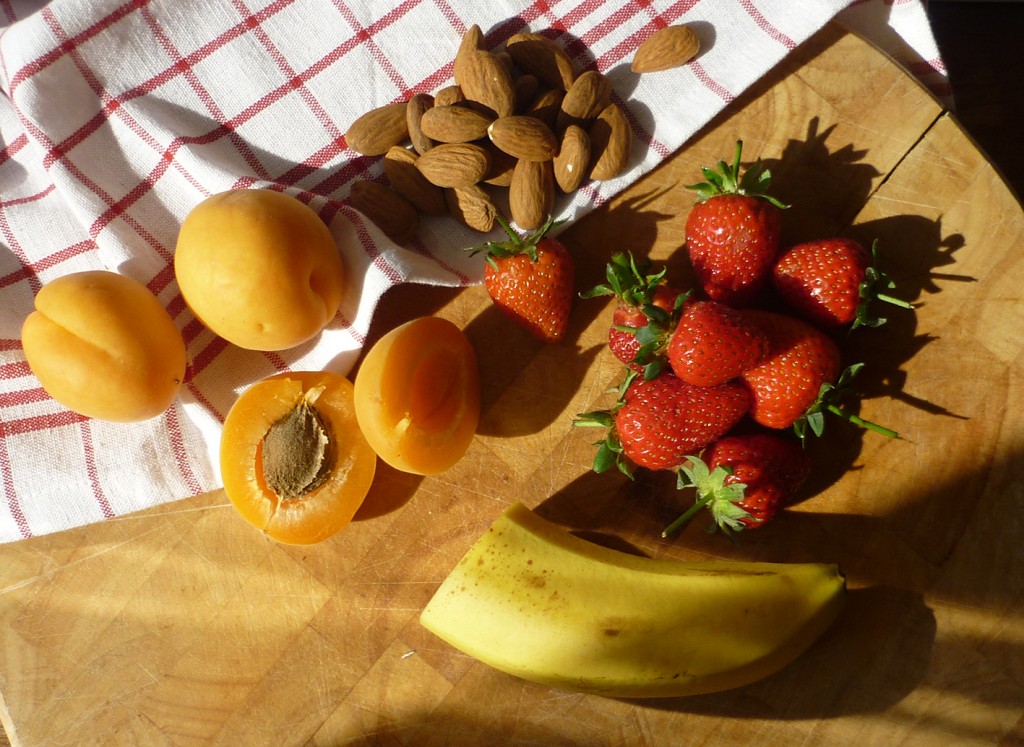 You could use all sorts of fruit in this recipe to make it appropriately seasonal, any kind of berry or soft fruit would be good, and apple would also work.  The almonds can also be omitted or replaced with pistachios, walnuts or pecans, whatever you fancy and have in the cupboard. 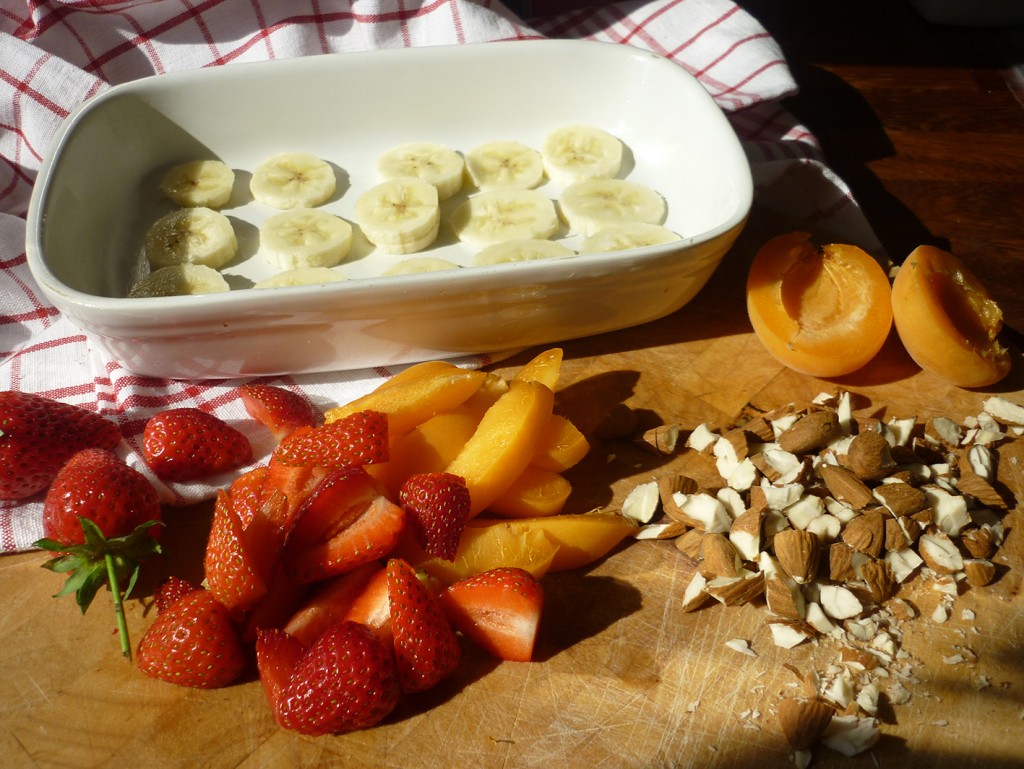 The layer of banana at the bottom stops it from sticking and adds a natural sweetness.

Mixing the fruit with cornflour stops the oatmeal from becoming watery. 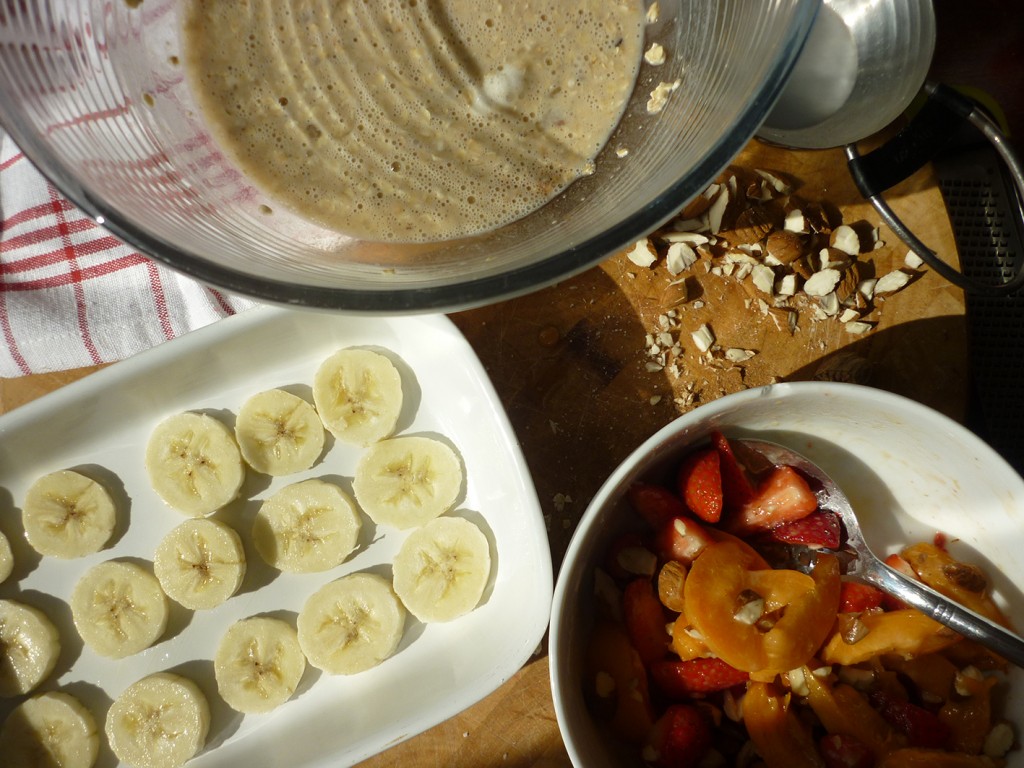 There is a little cinnamon and nutmeg in with the dry ingredients to add depth of flavour, I grated a little extra nutmeg on top too. 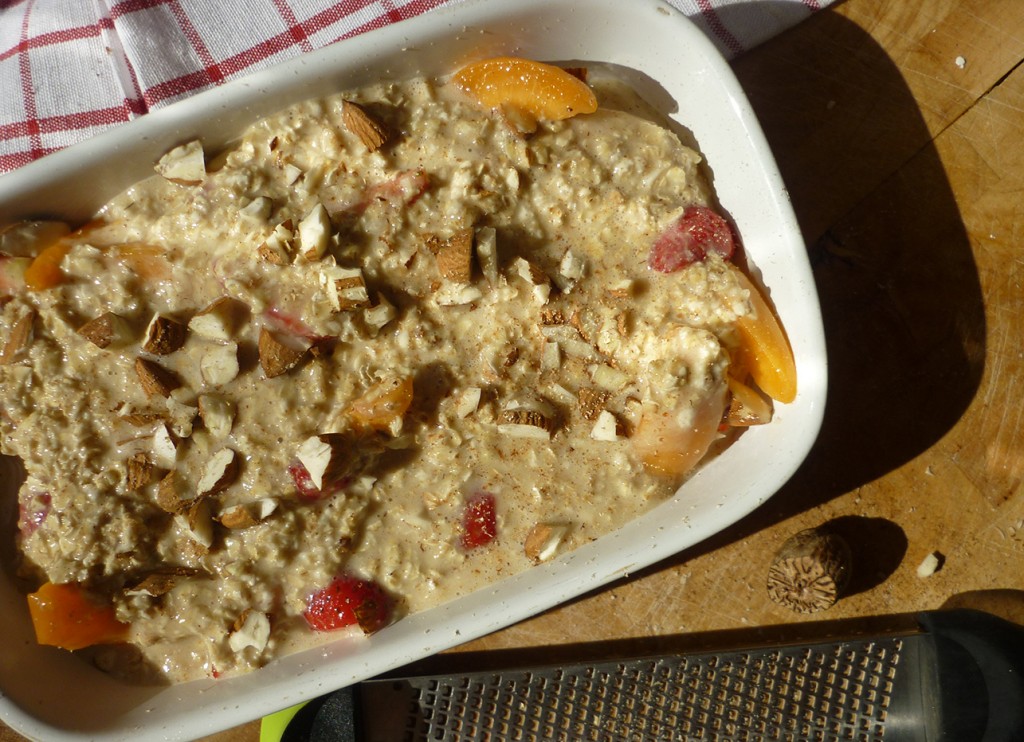 The oatmeal is best served straight from the oven with a splash of milk and some fresh berries and apricots. 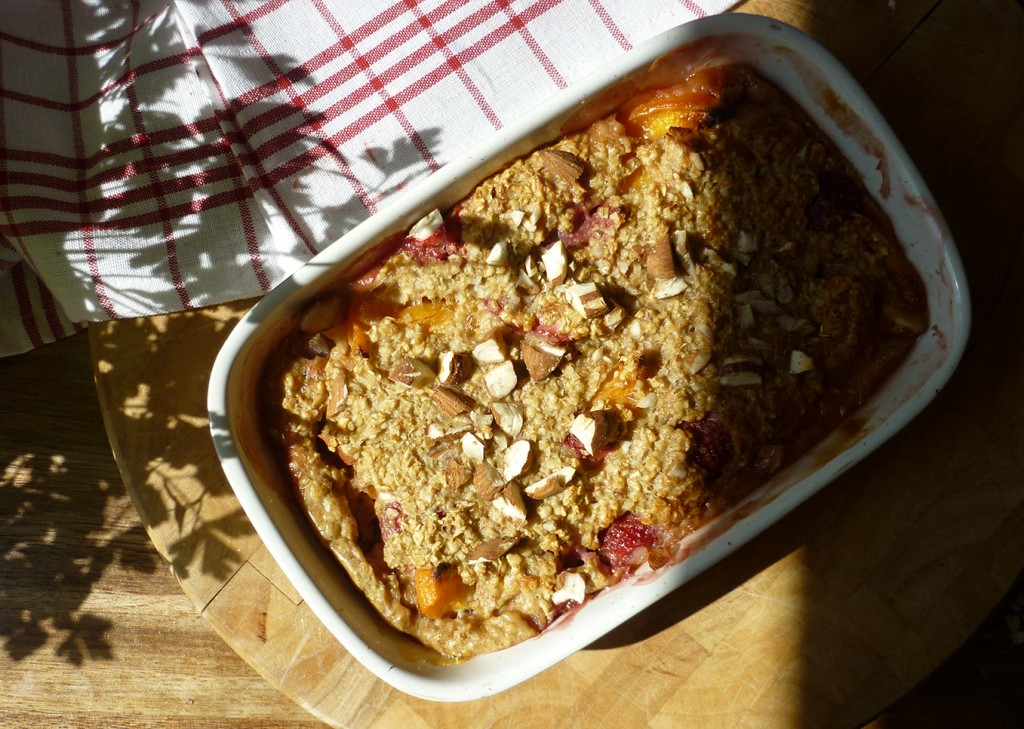 1/2 cup almond milk (or whatever milk you prefer)

1/2 tsp nutmeg, plus some for the top

Grease an oven proof dish and set aside.

Slice the banana.  Hull the strawberries and cut into quarters.  Cut the apricots in half to remove the stone then slice.  Roughly chop the almonds.

Line the base of the prepared dish with the banana slices.

In a small bowl combine the strawberries and apricots with two tablespoons of honey and the cornflour, stir until the cornflour has dissolved.  Stir in half of the almonds.

In a jug combine the almond milk, eggs, honey and vanilla.

Mix together the oats, baking powder, salt and spices.  Add the egg mixture to the oats and stir to combine.

Spread the fruit mixture evenly over the sliced banana.  Pour the oat mixture over the fruit and top with some grated nutmeg and the remaining almonds.

Bake for 40mins, until lightly browned and set.