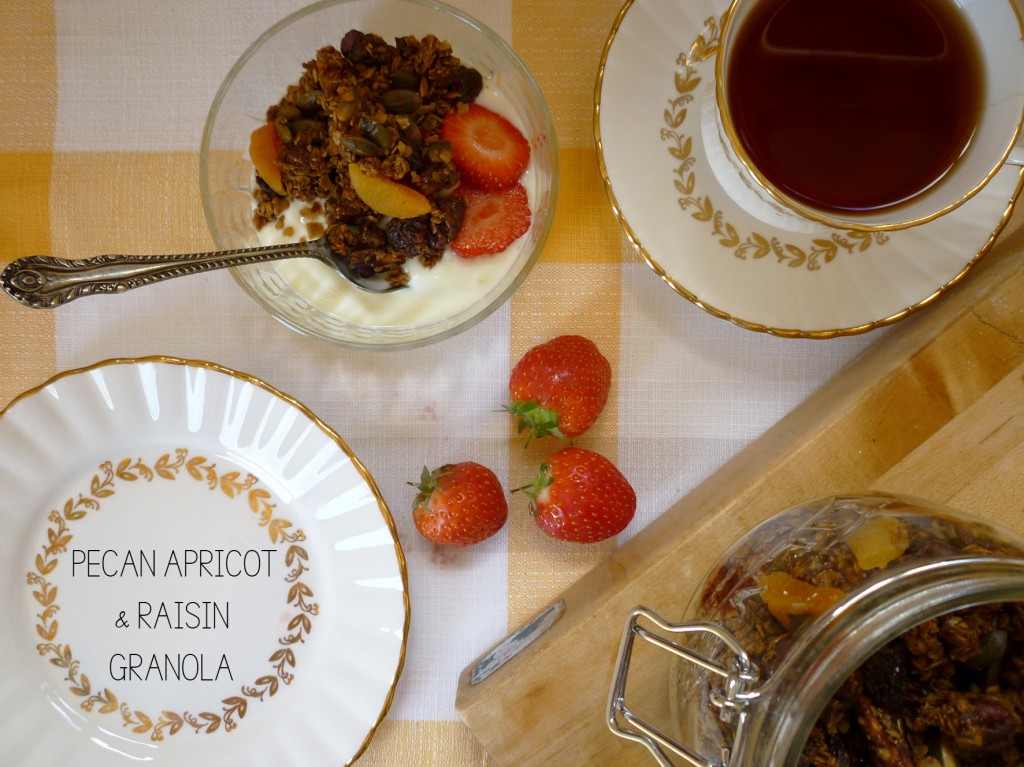 Last year I gave my extended family (aunts, uncles and cousins) homemade gifts for Christmas.  For my cousins I made either salted caramel popcorn, cookie mix in a jar or brownie mix in a jar and for my aunts and uncles I made granola.  Whilst I was at home this past weekend my mum mentioned to me that my aunt and uncle had passed on that they had really enjoyed the granola and asked if I would make them another batch.  My aunt had also said that it took her weeks to convince my uncle to try the granola because ‘he didn’t fancy the look of it’ much.  When he finally gave in and tried some on his yogurt, he loved it! 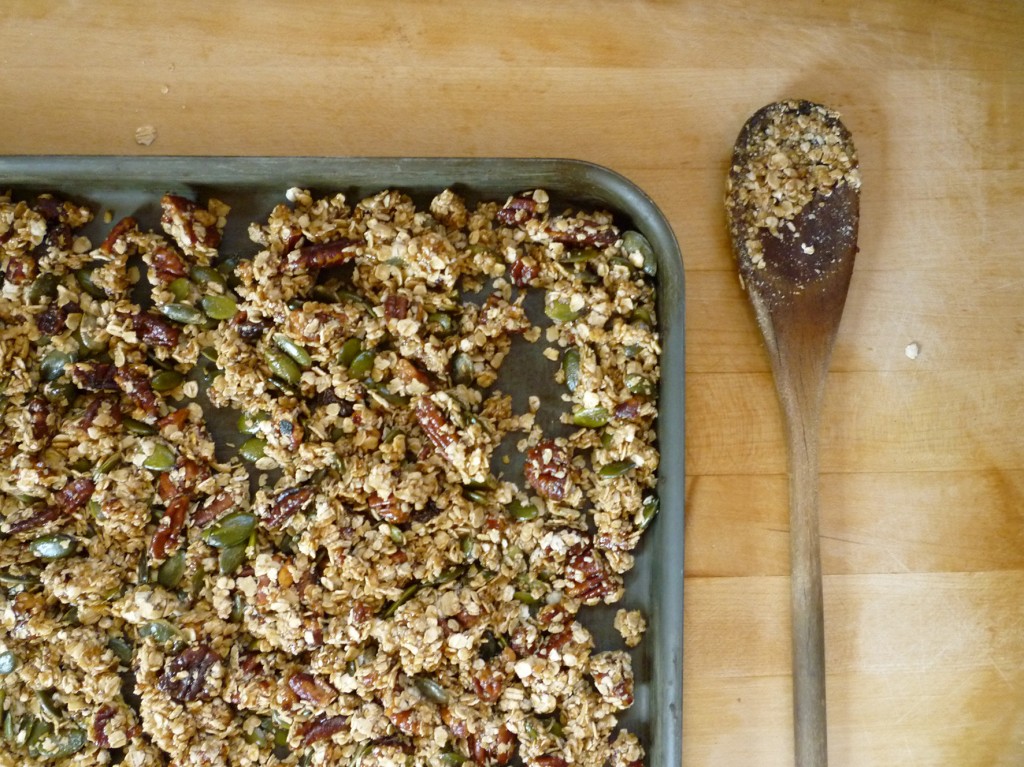 This is not the granola that I made at Christmas but it is equally delicious.  It is a very much adapted version of Tracey from Shutterbeans Killer Granola recipe – this is because I made do with what was on hand in the cupboards.  The key part in her recipe still appears though, and it is certainly what gives this granola its caramelly crunch, which is the cooking of the nuts butter and sugar together before mixing it with the dry ingredients.  It really is a little extra special something in your morning yogurt. 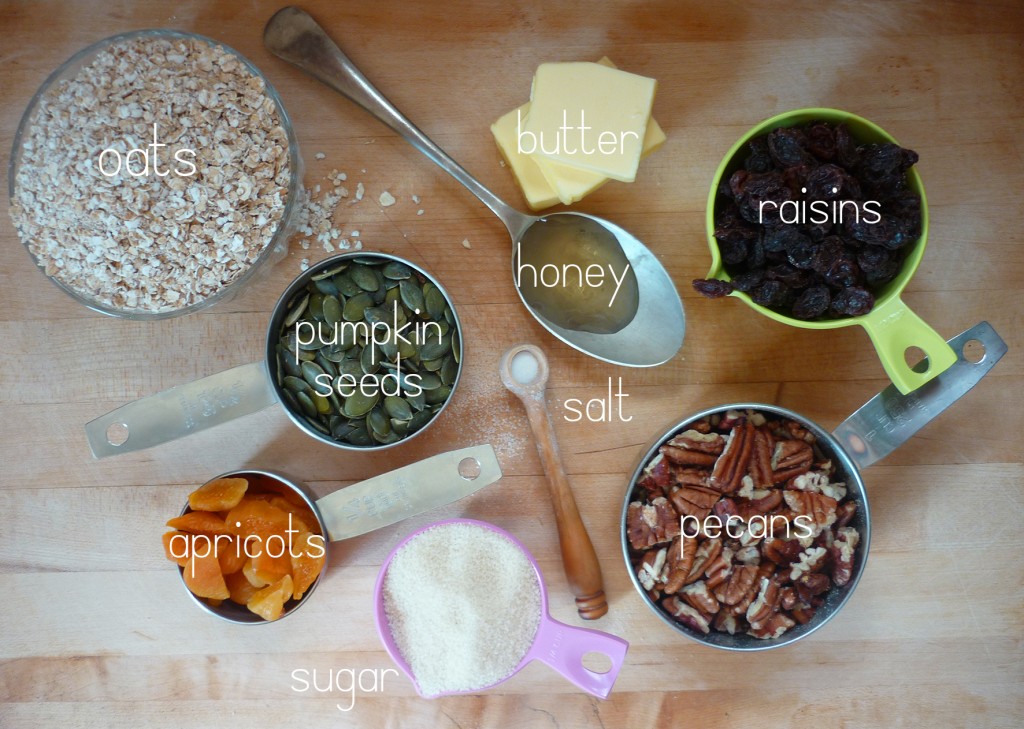 I don’t seem to have the best luck with melted sugar and nuts and I think I slightly over-did the pecans again but it still tasted great. 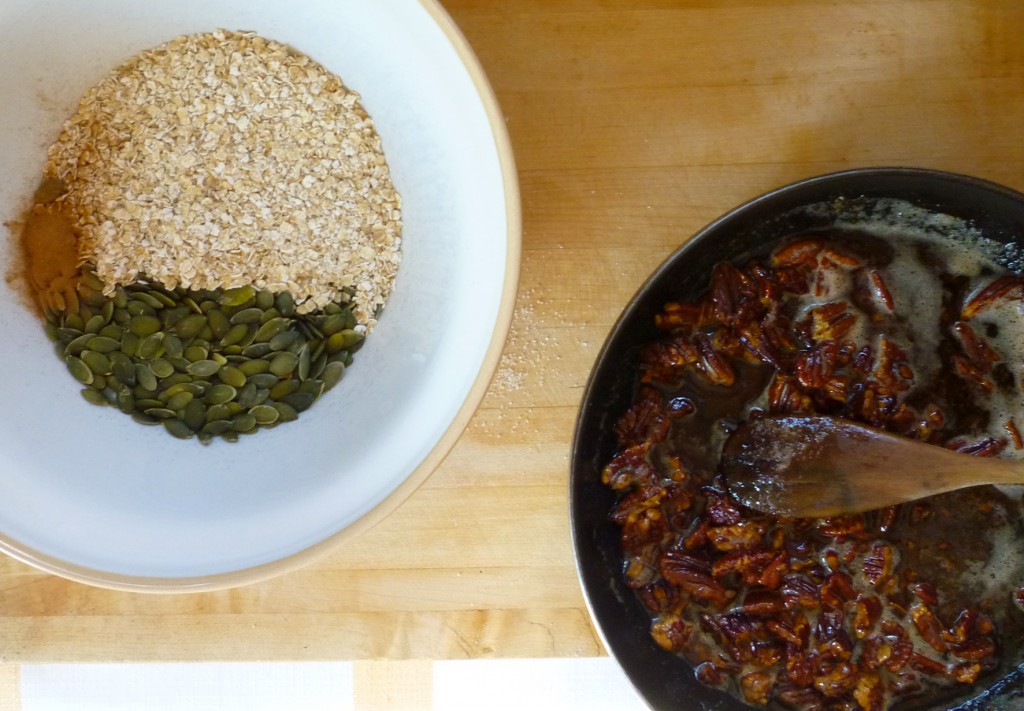 The caramelised nuts are stirred in to the dry ingredients.  I added in some pumpkin seeds to this batch, the green looks so pretty against the oats and nuts. 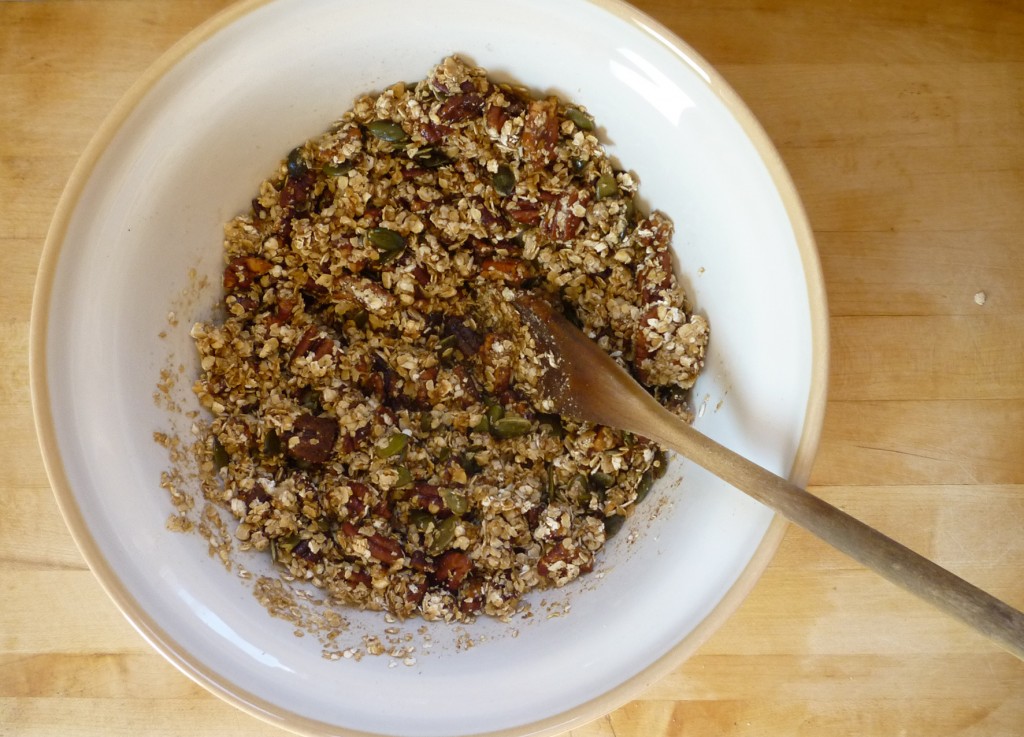 I never had a chance to pass this batch of granola on to my uncle but hopefully it goes down as well as the Christmas batch did!

inspired by and adapted from Shutterbean

In a large mixing bowl, measure out the oats, pumpkin seeds and cinnamon and set aside.

Melt the butter over  a medium heat, then add in the sugar, honey and pecans.

Continue to cook until all of the sugar has dissolved.

Take off the heat and stir in the vanilla extract.

Stir the sugar mixture into the dry ingredients until everything is evenly coated.

Tip the mixture out onto a baking tray lined with greaseproof paper.  (I didn’t do this but as the granola was cooking I could see that it was going to stick so I transferred the whole lot onto greaseproof paper, so it would have been easier if I’d baked it on this)

Bake the granola for about 30 minutes, stirring two or three times to ensure it is evenly baked and to break up the clumps.

Remove from the oven and allow to cool before spreading over the dried fruit.

Transfer cooled granola into an airtight container and enjoy!